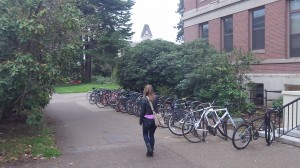 On the campus of Oregon State.

Oregon’s three biggest public universities are about to undergo a big change in how they are governed. This could be good if it holds down or even lowers the price of attendance, as unlikely as that is. It will be a mistake if it accelerates the soaring rise in tuition and fees and results in an administrative structure even more bloated than it already is.

On Tuesday, the state Senate education committee expects to advance an amended version of Senate Bill 270. The 202-page measure would authorize the governor to appoint boards of trustees for the University of Oregon and Portland State, as well as Oregon State if the school wants to go that route. The smaller universities including Western also could seek separate boards under certain circumstances.

The change would free the schools to raise money on their own and control their own funds, including keeping whatever tuition and fees they generate. They could raise tuition up to 5 percent a year and form their own police departments, among many other changes.

Sen. Mark Hass of Beaverton, the committee’s chairman, says the bill enjoys bipartisan support and will become law. Nobody says so out loud, but this will also make it easier for the legislature to lower state support for these institutions to even less than the 9 or 10 percent support it now provides.

Will this be a change for the better? Maybe so, but we won’t know for a few more years. (hh)

Ted Salmons responded on April 13:  I agree with the need for less state rules and would even go further. If they’re so ready to be totally self-governing then let them have a go at it. “Gift” the property of these state funded universities to them. Let their employees know that at the end of the fiscal year they are no longer state funded employees and their PERS contributions stop at that point. Then the schools are free from most of those pesky state rules and regulations. They’ll be free to function and administrate themselves just as any other private school is allowed to do under existing laws. Oops, wait a minute, they will be private schools. Free to pay their own bills. Fund their own health insurance and retirement systems and compete with other schools for customers (read students).  Then maybe those bloated sports programs can start funding some academic programs other than being a “farm league” for the NBA and NFL. You want to self govern. Here’s your chance. Let’s see how dedicated your administrators are to the idea of going it alone. If not. Sit down.  Shut up, and listen to the state that’s funding your self-righteousness.

Rich Kellum responded on April 13: Great, now let’s get that check for the billions of dollars the taxpayer spent on the universities’ facilities, end PERS contributions, end the special treatment required by cities’ fire and police departments, planning and building departments etc. Oooooo  I can see all that money coming in now.

Postscript: Just so we understand this, the campus buildings and university properties would continue to be owned by the state. (hh)