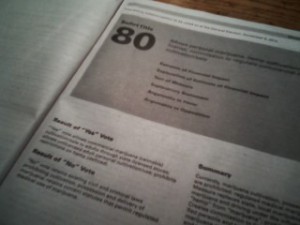 Here the general electon is just around the corner and you have heard almost nothing about Ballot Measure 80. That’s the initiative that would legalize marijuana in Oregon — and try to regulate and tax it. Nobody is spending any money for or against its passage. You may have seen an occasional newspaper editorial about it, but the airwaves have been noticeably silent.

The supporters report spending less than $50,000 on getting their measure adopted. They had hardly any money left after spending about $300,000 to get it on the ballot, mostly in paying signature collectors. The opponents are the chiefs of police, the sheriffs and the district attorneys. They put statements in the voters’ pamphlet, and that’s the extent of their campaign.

Measure 80 would allow commercial cultivation of marijuana and sale to adults through state-licensed stores, kind of like liquor. It also would allow adults to grow as much of the stuff as they want for their own use. The law change would retain the medical marijuana program, but it’s hard to see why.

Law enforcement points out that cultivation would still be illegal under federal law. Who would risk a federal indictment by openly growing commercial marijuana for sale to state-licensed stores? So if it passes, the practical effect of this measure may be small. But its symbolic effect would be big. Two other states, Washington and Colorado, are voting on similar measures. If all three are approved, that could be the start of forcing Congress to come to its senses and repeal the criminal treatment of a weed. (hh)