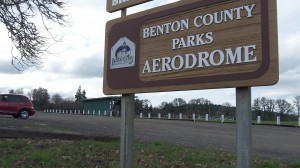 You could call this place Drone Central in Benton County.

With all this talk about drones, the Oregon legislature may set some ground rules. And it’s about time. Judging by what you read about the increasing popularity of using unmanned aircraft, those things are going to be buzzing overhead any time now.

The state Senate Judiciary Committee has a bill that deals with the issue. It’s Senate Bill 71-4, and the committee plans to consider it on March 20 at the Capitol in Salem. First, the bill would make it a felony to use a drone for invasion of privacy or to intercept communications, hunt a game animal, commit a trespass, or stalk someone. It would become a class A felony, the worst kind, to use a drone to harm another aircraft in the air.

Further, public bodies would be barred from operating drones without first registering them with the state. Law enforcement would be barred from surveillance of private places by drone without a warrant. It could use a drone to track a fugitive or  stop a crime in progress, though. But drones would be barred from use for speed control. And if a drone flew lower than 400 feet over your private property, you could sue for damages unless the thing was taking off or about to land. All these seem like reasonable provisions.

I noticed that the definition of drone — unmanned flying machine — would seem to include radio-controlled model planes as well. But as far as I know, those hobbyists at Adair and their little aircraft don’t do the things the legislation would outlaw, so they’ll be all right. (hh)