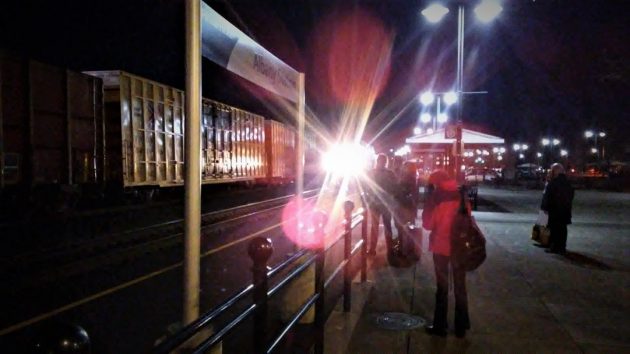 Of the many ways to get from Albany to Seattle and back, taking Amtrak is probably the cheapest and least stressful. Oregon officials are still working on a plan to make the Oregon leg of the trip more convenient, and a little faster too.

Waiting at Albany Station on Sunday night, I let my attention wander to a leaflet inviting people to an open house and hearing from 5 to 7 Tuesday night, Dec.4, in the Fireside Room at Linn-Benton Community College. It’s a chance to learn more about, and comment on, the draft of an environmental impact statement.

Since 2012, ODOT has studied how to increase the number of passenger trains and have them cover the 124 miles between Eugene and Portland — via Albany, Salem, and Oregon City — in less time. The draft plan, completed this year, considers two possible alignments. One would make track, signal, and other improvements on the Union Pacific main line, the route Amtrak uses now. Alternative 2 would build a new track following I-5 and I-205.

A committee overseeing the planning process has recommended Alternative 1, which would cost less, up to about $1 billion in capital costs through 2035, versus around $4 billion for Alternative 2. But Alternative 1 would limit trains to 79 mph, versus up to 120 mph on a new alignment following the freeway.

Alternative 1 is estimated to result in slightly more passengers in 2035 than Alternative 2: some 739,000 versus 723,000. That’s because the existing stations are in the central cities, whereas the freeway route would require new stations outside.

The study projects the Eugene-Portland travel time under Alternative 1 would be 2 hours and 20 minutes, just a little less than now. Trains on the freeway route would take about 20 minutes less. Now the trip takes two and a half hours.

Amtrak now runs three daily Cascades trains each way, plus the north- and southbound Coast Starlight. In between, ODOT has arranged for “Thruway” buses to help people complete trips when no trains are scheduled.

ODOT expects to publish a final plan and decision on this project in 2019. That would trigger additional environmental studies. And then it would be up to somebody — most likely Congress — to budget the money to carry out the plan.

While the rides are inexpensive now, that applies only to the prices passengers pay. When you add in the amount Oregon pays Amtrak to run the Cascades service and another company to run the buses, the cost per ride is several times as high.

Still, standing on the platform and watching a train come in, as in the video below, you don’t have to be a rail fan to appreciate the effort the state has made. Some say that self-driving cars will make trains even more obsolete than they are now. But maybe not. When tens of thousands of additional autonomous and thus effortless cars clog all the roads, making our highways all but useless, chances are we’ll appreciate the ability to get somewhere on a train, more or less on time. (hh)


25 responses to “Oregon Passenger Rail: A chance to react”