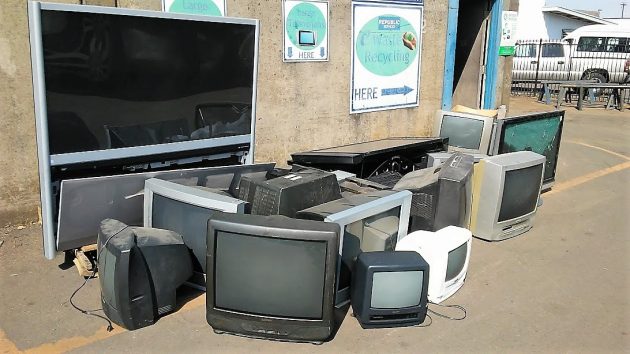 Technology marches on, and in case you had forgotten, you are reminded when you take a TV in for recycling because it was replaced by a new set long ago.

A few days ago I dropped off a couple of old TVs at the Republic Services depot, 1214 Montgomery St. S.E. You can do that there, and at other places in Albany, because of a law passed by the legislature in 2007.

Since 2010, it’s been illegal to dispose of computers, TVs and cathode-ray-tube monitors in Oregon landfills. Manufacturers are required to provide free recycling of those products, which contain lead, copper, gold, and other substances that are either toxic or valuable or both. (Lifting an old TV tells you that there’s plenty of lead in there.)

Since the law first took effect, keyboards and computer mice have been added to the list of items that are to be recycled instead of thrown away. (For all the details on Oregon’s E-Cycles program, plus the hours and addresses of places that accept the items, go here.)

The DEQ says we can take up to seven of those items at a time to a free recycling center. The state agency lists four such places in Albany. Besides Republic Services, they are Goodwill and St. Vincent de Paul on Pacific Boulevard, and Teen Challenge on Second Avenue.

The law seems to be working all right. The sight of all those old TVs made me glad that they’re not ending up and taking up space at Coffin Butte. (hh)