OReGO update: How about bikes? 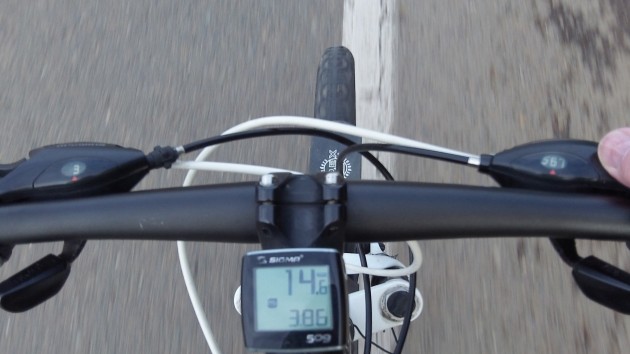 Maybe bike computers could be rigged to report mileage so cyclists could be charged like motorists.

Let’s check in on OReGO, which seems to be flying under the radar of public interest and perhaps awareness. Maybe people would be more interested if I raised the possibility that Oregon’s pioneering approach to road taxation might some day work to get a little extra revenue from bicyclists as well.

As you may remember, state law authorizes up to 5,000 cars and light trucks under 10,000 pounds to participate in ODOT’s program of taxing vehicles by the miles they are driven on public roads within the state, instead of via the gas tax. The voluntary program started July 1, 2015, but so far only 1,005 vehicles have been signed up, OReGO spokeswoman Michelle Godfrey told me Wednesday.

One of them is my 2007 GMC pickup, and it is costing the state a few pennies every time I take it out on the road. That’s because while OReGO charges me 1.5 cents per mile I drive the truck, it also refunds the gas tax that I’ve already paid at the pump. And the truck’s mileage, while decent, results in me paying slightly more than 1.5 cents per mile in gas tax.

I don’t drive the truck all the time and so far I’ve not actually received a refund. But as of Thursday night, ODOT owes me $19.93. (I think they’ll send a check when the amount tops $20.)

On its website, OReGO answers common questions. One of them is whether bicyclists and motorcyclists can take part in the mileage-tax program. Answer: No, only certain motor vehicles are included.

But I know there’s some public interest in getting bicycle riders like me to pay more than we already pay as motor vehicle owners. So I wondered whether something like OReGO could eventually cover bikes as well. Perhaps bike computers could be adapted to report mileage to the mobile phone network the way the mileage reporting devices now do for participating cars.

“Including bicycles in the program is an interesting tweak to think about, but probably pretty far down the road,” Godfrey replied when I put the question to her. “We would need to prove OReGO first, have it expanded and perhaps mandated for vehicles before that would likely even be considered. By that time, the technology for mileage reporting will have evolved and a device may not even be necessary (perhaps use the car’s in-dash telematics or a cyclist’s smartphone). So it’s difficult to say what could happen.”

As for the program itself, Godfrey says it’s running smoothly and the retention rate among the volunteers is around 95 percent. “Volunteers are reporting positive experiences in the program, and that evaluation is continuing.”

Sooner or later, the legislature will have to decide how to proceed. OReGO has no ending date, but since it reached only 20 percent of its authorized size eight months after the start, it does not look as though this is something Oregonians are eager to accept. (hh)


10 responses to “OReGO update: How about bikes?”