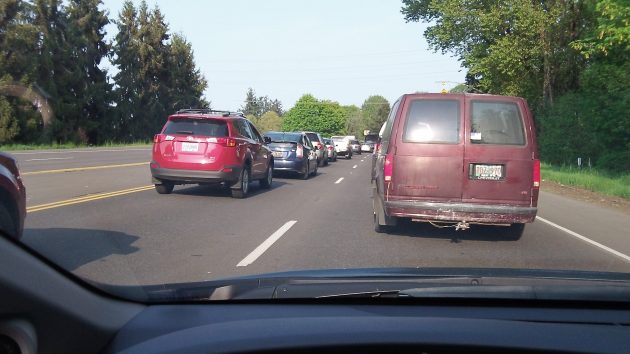 Just how necessary is the VMT system Oregon is now using on volunteers?

As one of the volunteers paying Oregon’s vehicle mileage tax — in theory anyway — I’m thinking the program is needlessly complicated as long as it applies to vehicles powered by conventional fuel. That’s because of all the record keeping necessary to calculate the tiny difference between the mileage tax and the fuel tax already paid.

The main reason we need a mileage tax is that some — a small percentage so far — of motor vehicles don’t use diesel or gas, and a few more have a hybrid propulsion system. So why not apply the VMT or some alternative method only to them?

As it is, the legislature authorized a VMT pilot program for all kinds of vehicles. I signed up at the start in July 2015, enrolling a 2007 pickup. I paid gas tax as usual, and a gizmo in the truck reported the daily miles driven to the “OReGO” program, which charged 1.5 cents for each mile the truck moved. After about nine months, I got check for about $20, the difference between the mileage fee and the gas tax I had paid.

Then there came the sad day last spring when I traded in my beloved truck. The new one is more efficient. Now the mileage tax accumulates slightly faster than the 30-cent/gallon gas tax charged by the state. On Wednesday, OReGO emailed me an accounting for the six months from April through the end of September. It started with a balance of about $5 left over from the old truck. Since the change, I was charged about $44 in road user fees, while burning 132.7 gallons of gas, on which I paid just under $40 in state tax. So now, my OReGO account manager informs me, my left-over balance has been reduced to $1.18.

OReGO sends refunds or bills only for amounts of $20 or more. Still, all this keeping track and calculating minuscule amounts is unnecessary for the fuel tax alone. We pay the tax when we gas up, and that’s it.

To pay for the VMT pilot program, the legislature authorized about $5 million in 2013-15 and another $5.8 million in the current biennium, most of it going to outside contractors such as the companies keeping track of mileage driven and amounts to be charged or refunded.

ODOT says the road user charge is necessary because fuel efficiency is going up. And in 20 years or so, the government says vehicles are supposed to average 50 mpg, leading to a sharp decline in the amount of gas-tax money collected for roads. But another answer would be to increase the tax in proportion to the rise in fuel efficiency. This would retain the pay-as-you-go simplicity of the system we have.

As for the slowly increasing fleet of hybrid and battery-only vehicles, we could charge their owners either the VMT or other recurring road user fees that would be roughly equivalent to the road tax on fuel. Wouldn’t that be a less complicated way to go? (hh)