Only the players get zilch 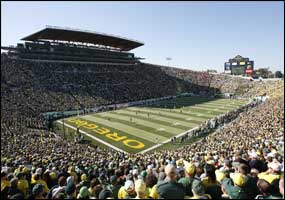 Where the cash for athletics is earned: Autzen Stadium as shown on GoDucks.com.

Once again there’s talk in the NCAA of possibly paying college athletes for their work. The argument against it is that the athletes are getting a more or less free education, and that should be enough. It’s a dubious argument considering that participation in top-flight athletic programs is a year-round obligation that doesn’t leave much time for a serious study. The argument for paying athletes is that many others are raking in buckets of money even though they risk nothing on the field or the court.
Take a look at the payrolls published by our top universities on the Oregon Transparency website. The top money earners at both Oregon and Oregon State are the head football coaches — $1.8 million in fiscal 2013 at the U of O and $960,000 at OSU. (The OSU coach’s salary was $100,000 more than the year before.)

I stopped counting when I got to an assistant baseball coach who made $134,550. Twenty-seven members of the U of O athletic staff made more than that.

The money for all these handsome salaries comes, directly and indirectly, from what the players accomplish on the football field and maybe the basketball court. You’d think they should be entitled a small share of all that cash. (hh)


3 responses to “Only the players get zilch”