Only in Albany: Pushing a bear – Hasso Hering

Only in Albany: Pushing a bear 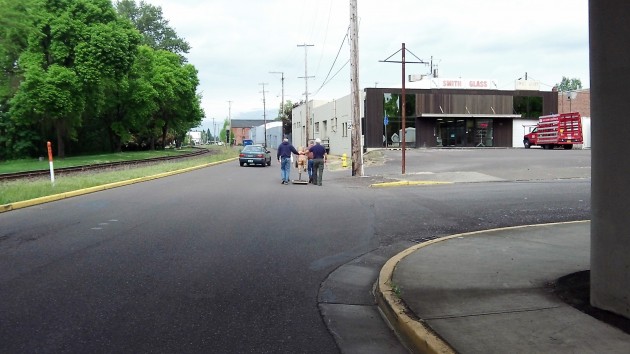 I’m riding my bike down Water Avenue in Albany on Wednesday evening, when off in the distance I see what looks like people pushing something down the street. What they’re pushing appears to be the backside of … what exactly?

Getting closer, I realize it’s a wooden bear. At least from the back it looks like a carved and painted wooden bear. But just as I get close enough to ask this squad of bear pushers why they are pushing a wooden animal down the street, they turn up the driveway in front of Smith Glass. So I don’t get to see their faces or the front end of the bear, or ask where they are going and why. 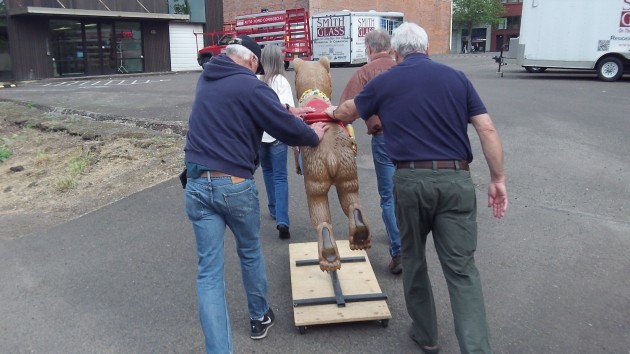 I don’t have to ask what they’re doing. I’ve read and heard — and observed as well —  that the Albany Carousel has been evacuating its equipment and all its newly carved carousel creatures from its building at Washington and First because the building is about to be torn down.

The organization’s volunteers have shifted their headquarters to temporary quarters in two Rivers Market. And the carousel animals are finding shelter with various businesses around town. This one — from the back it looks like its name should be Running Bear — looked as though it had found a foster home downtown. If you want to see it from the front, look around and you’ll probably find it staring at you from the window of some shop.

Riding a bike around town is not always this entertaining. But these days, now and then, you can see carousel animals on the move. In a year or two it will happen again. That will be when the new carousel building is finished, the antique mechanism is set up, and all the animals migrate back to their permanent home so they can start going in circles at the corner of Washington and First. (hh)

3 responses to “Only in Albany: Pushing a bear”