One walnut tree versus eight townhouses 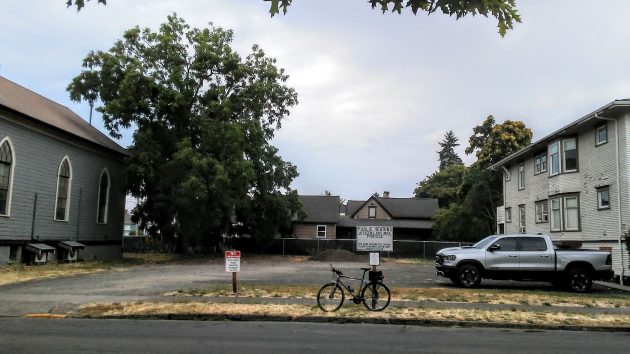 The empty lot at 224-234 Third Ave. S.E. on Friday night. The walnut tree in the left rear corner has become an issue.

On July 19, three members of the Albany Planning Commission objected to construction of eight single-family townhouses on Third Avenue downtown because it would take down a walnut tree in the corner of the site. On Monday the commission will get a chance to undo that action because, as it turns out, the city development code on felling trees doesn’t apply unless five or more trees are intended to get axed.

The proposed building site consists of six small tax lots at 224 and 234 Third Ave. S.E.  On one side there’s Albany’s oldest remaining church building, until recently the headquarters of the CHANCE addiction-recovery program. On the other there’s the former “Labor Temple,” which has been turned into apartments with the help of CARA, the downt0wn urban renewal district.

The Lepman real estate organization, which owns the apartment house next door, wants to build eight three-story townhouses on the property, with individual garages facing either the street in front or the alley in back.

The planning staff found the application met all applicable review criteria and recommended approval of the site plan. But after a discussion mostly about the walnut tree in the corner, the commission voted 3-2 not to approve it. (I didn’t watch the virtual meeting, and the audio recording on the city’s website makes it impossible for me to hear who voted which way.)

Defenders of the tree on the commission wanted it saved. But the applicants said it was either the tree of the townhouses.

In a memo for Monday’s commission meeting, planning manager Scott Whyte and Matthew Ruettgers, community development director, said the planning staff had reconsidered the relevancy of the tree-felling criteria in the development code. They said this code section applies when five or more trees are to be cut, not to the felling of just one. The implication is that using the tree as a reason to deny the request was a problem.

Proposals to build apartments or townhouses on this site have been floating around for close to 20 years, if memory serves, only to be considered and dropped. The question now is whether this one is realized or stopped over a big tree. (hh)

Post script: Planning supervisor Scott Whyte reports that on Aug. 2, the planning commission rescinded its previous decision with the understanding that a new public hearing will be scheduled or Sept.13.

Leafless in November 2018, that walnut didn’t look quite as big as it does this summer.


14 responses to “One walnut tree versus eight townhouses”