One small symbol of decay 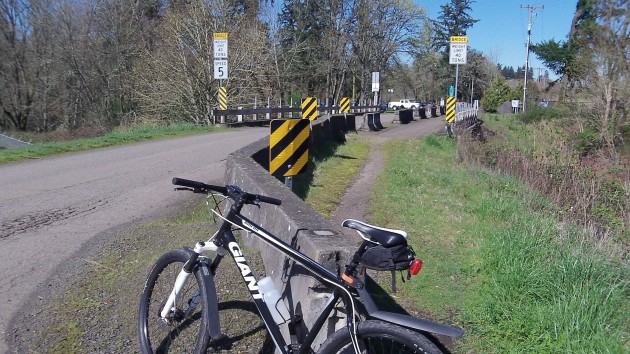 Handy for leaning a bike, concrete barriers still close half of the Cox Creek bridge.

For 11 years now, this bridge on Albany’s Cox Creek has been restricted to one lane, with concrete barriers and piles of gravel closing half of it. It looks like a permanent symbol of our crumbling infrastructure, which in itself may be a sign that our civilization is slowly falling apart.

After an inspection showed problems with the bridge supports, Linn County made emergency repairs by reinforcing some pilings in early 2005. Since then the county relinquished ownership to Millersburg. The Millersburg council has discussed the bridge but taken no action, City Administrator Barbara Castillo reports.

Trucks going to and from the Millersburg yard of the Portland & Western Railroad use this access. And while the bridge is just inside the Millersburg city limits, it is an Albany issue because it serves as the gateway to Albany’s increasingly popular Talking Water Gardens and Simpson Park. While the original 2005 weight limit of 16 tons evidently has been raised to 40 tons, the barricades make it plain that the structure still needs fixing.

But the chances of reconstruction are slim to none. Albany lists $257 million in needed street maintenance and construction work, but none of it is funded in its current five-year capital improvement plan. The money just isn’t there.

The city’s plan acknowledges that the need for street work gets bigger as long the work isn’t done, and the longer it is deferred, the more expensive the solution will eventually be. The idea of a street “utility” tax has been considered but put off in the interest of not swamping residents with utility fees beyond their ability to pay.

In the big picture, this little Cox Creek crossing, out of the way for most people, is not on anybody’s radar. So it will just sit there, an ugly reminder that as a society we have lost the means and the will to take care of things as basic as bridges and streets. (hh)


16 responses to “One small symbol of decay”