One fewer check on power 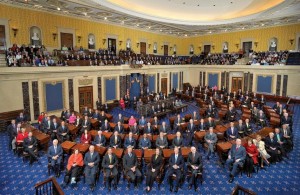 The senators in their seats as shown on the Senate website.

The Democrats in the U.S. Senate last week changed a rule that has governed the Senate since the earliest days of the republic, and the country may come to regret it.

No longer will a three-fifths majority be required to confirm people for important government jobs. A simple majority now will suffice. The Democrats changed the rules because the Republicans refused to confirm judges nominated by President Obama, and they regarded this as preventing the government from working as it should.

Well, the House has just voted for a bill intended to keep the government from imposing needless regulations on fracking, the method by which industry has sharply improved our fuel and energy supply. The bill, though, will die in the Senate, where the Democrats are in charge.

So, if the Democrats block action on something, it’s called democracy. If the Republicans block action, it’s called obstruction. That kind of double standard may be routine in politics. But it also causes citizens to become cynical about our form of government.

One founding principle of American government has been that of checks and balances. Obama’s Senate allies have removed one important limitation on the power of the office that needs checking the most. (hh)

One response to “One fewer check on power”