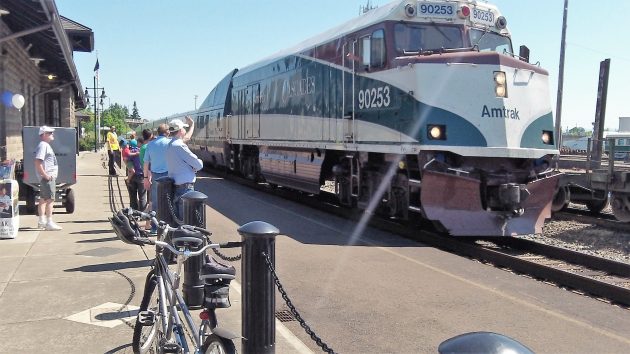 An Amtrak Cascades train from Portland arrives in Albany one Saturday in May.

Back to trains for a moment, if you don’t mind. More specifically passenger rail. Once again, in advance of next year’s legislative session, there’s a question whether the Amtrak Cascades train service between Eugene and Portland will continue beyond June 2017.

It’s an expensive proposition to keep the six daily trains running. (When they’re running, that is. For July 5 and 6, they were canceled because of work on the track, Amtrak’s website says.) For the current two-year budget period, the state of Oregon is paying Amtrak $17.5 million. With nearly $4.9 million in maintenance and repairs, plus about $5.7 million for services and supplies, Oregon’s total expenses in the 2015-17 budget period top $28 million.

The state rail budget assumes that passengers will pay Amtrak some $6.5 million for tickets and snacks. So passengers pay less than 20 percent of the program’s cost. And according to a budget analysis for the legislature, the ODOT Rail Division estimates the “all-inclusive passenger rail subsidy in Oregon” at $120 per passenger.

To support passenger rail, ODOT uses the money people pay for custom license plates ($6.6 million) and about $3 million from the gas tax collected on fuel used in engines of other than vehicles, plus various chunks of federal funds for transit and such. But that still left a $10.4 million hole, which the 2015 legislature filled with an allocation from the general fund. Will lawmakers do the same next year? Who knows, but the Oregon Passenger Rail Project warns in a June 29 press release: “If the funds are not approved, the passenger service may have to be significantly reduced or eliminated completely.”

The passenger project has been working since 2012 on a plan to increase rail service, but the going is agonizingly slow. They are now working on the draft of an environmental impact statement analyzing two “build’ alternatives and one “no action” alternative. The proposed preferred alternative is to use the existing Union Pacific line and add four round trips a day between Eugene and Portland. Public hearings on the draft likely will be held in 2017. Then the Federal Railroad Administration eventually will decide on the preferred alternative. But after that, nothing further happens unless and until Congress approves money to make all the track and related improvements to allow for eight more daily passenger trains on the UP track. We’re talking hundreds of millions. So don’t hold your breath.

In the meantime, we could help the budget situation by getting many more paying passengers to ride the Cascades trains more often. But Amtrak doesn’t exactly make it easy, at least not for people like me. Their online reservation system and pricing scheme confuses me. For train service to work, you have to be able to go to the station a few minutes ahead of time, buy a ticket and hop aboard. Or buy your ticket on the train. If taking the train is much more complicated than that, you might as well take the car.(hh) 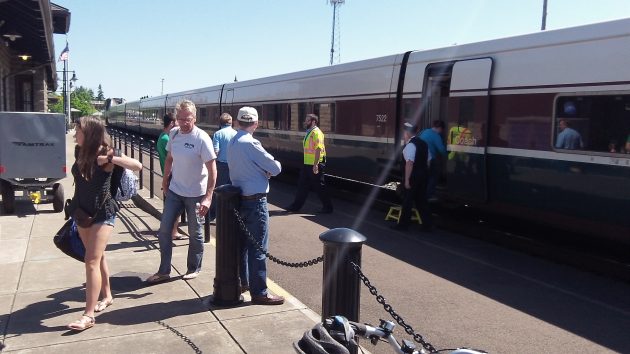 Passengers arrive in Albany aboard the Amtrak Cascades.