On west side, cluster housing 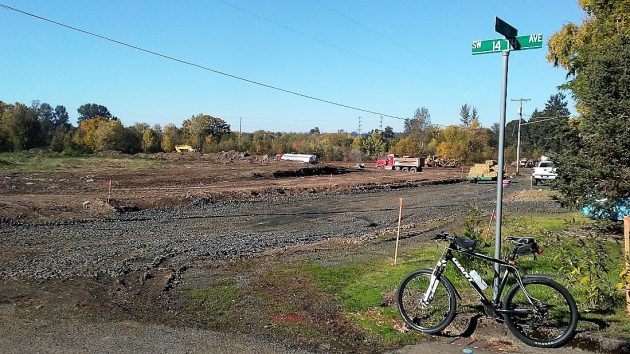 Part of the open countryside at the western end of Albany’s 13th Avenue has been torn up for the construction of a subdivision of 32 single-family residential lots.

The construction is taking place in an out-of-the way corner near the western city limits. I didn’t learn of it until after I asked why 13th Avenue west of Broadway suddenly acquired an asphalt overlay a few weeks ago. It turns out that a two-inch layer of new asphalt on 13th, to be installed by the developer, was required as a condition of approval of the subdivision at the street’s western end.

Thirteenth is to be the main traffic route to the new area once the houses are built. The city also required that all construction traffic use 13th Avenue to reach the site. Another condition was that two speed bumps be installed on the street. I saw those bumps Monday but, moseying along on the bike, there was no need to slow down.

The Albany Planning commission approved the subdivision on 15.3 acres in July 2010. The property was owned by Byron Hendricks of Salem.

Subdivision approvals are good for five years. The Salem engineering firm handling the project, Multi/Tech, asked for and received a two-year extension in April 2015 and another one this year.

The tentative plat approved by the city called for 9.3 acres of the 15-acre site to be saved as open space. The rest was to be divided into 32 lots in what the city calls a cluster development. This type of development allows some flexibility on items such as lot size or setbacks in order to preserve open space.

The development is in the lowlands near the Calapooia River. The planning commission specified that all streets would have to have a crown elevation no lower than one foot below the elevation of a 100-year flood.

A few mature trees had to come down, but many more are to be saved in the open space that will be left. (hh)


9 responses to “On west side, cluster housing”