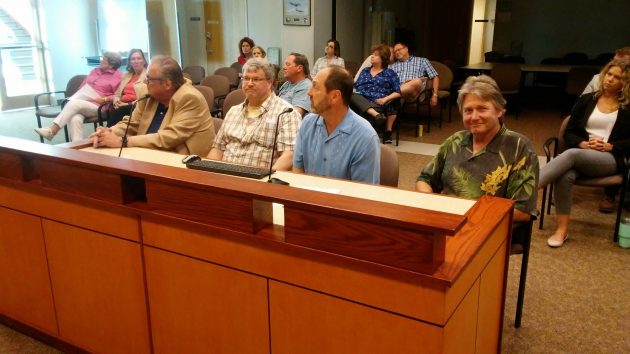 A team that includes the owners of the Sybaris restaurant and the builder of Albany’s police and fire stations will get the chance to make plans for redeveloping the former Wells Fargo property into something they promise will be an impressive addition to downtown.

On Wednesday, the city council acting as the Albany Revitalization Agency voted to grant a six-month purchase option for the former bank property to BGW Partners. The team consists of Buzz Wheeler, owner of the Albany-based Coastal Farm and Ranch Stores; Matt Bennett, the co-owner and chef at Sybaris; Tom Gerding of Gerding Builders, which has constructed many big projects in Albany; and Bill Ryals, the Albany architect who has designed the restoration of several downtown landmarks.

They are paying $25,000 for the option to buy the bank building and parking lot within 180 days for $1.5 million. Between now and then, they will work with the urban renewal agency to come up with a detailed redevelopment project. The only thing firm so far is that Sybaris will move to the ground floor of the remodeled bank.

The former First National Bank building was constructed in 1916 and used to have six stories until they were taken down in the 1970s. Ryals says the massive foundation represents maybe $2 million in value and should be exploited. One of the concepts is to put four floors of apartments on top what remains of the bank. 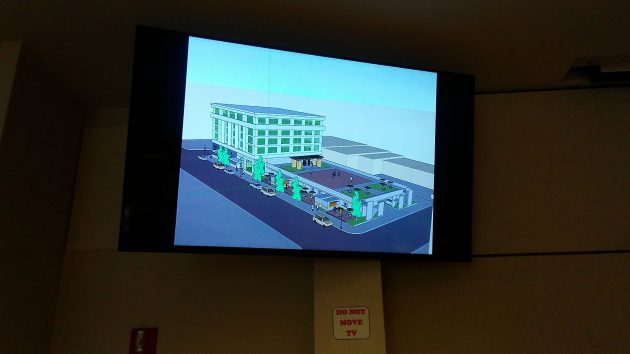 The screen shows one possible way the property could be developed.

The ARA or council members made their choice after the Central Albany Revitalization Area (CARA) advisory board, including the council and others, voted without audible dissent to recommend going with the BGW offer. The BGW team said they did not anticipate seeking CARA funds for whatever project they come up with.

There were two other proposals. Linn County offered to buy the property in 30 days for $1.5 million, renovate the bank as the county clerk’s office, and have Lepman Properties construct 24 apartments above the bank parking lot. Marc and Annie Manley, owners of the Flinn Block, offered to acquire the property for restaurants and other uses if they got a million-dollar loan to do so from CARA, with an option to buy the parking lot for $600,000.

There was a lot of talk about parking and how the bank lot might be used in different ways, especially in view of the potential redevelopment of the St. Francis Hotel across Ferry Street.

Ryals or Gerding, or maybe both, made the point that there are lots of different ways the parking lot could be developed to retain parking, including spaces for the public, while also serving other purposes. One of their computer slides showed a roof over the parking lot that could be used as a venue for outdoor events.

The bank property, on First between Broadalbin and Ferry, has long been designated on city plans as a key in reviving downtown. That’s why the city, as ARA, bought the site in February for $1.5 million after Wells Fargo closed the branch last year. (hh)