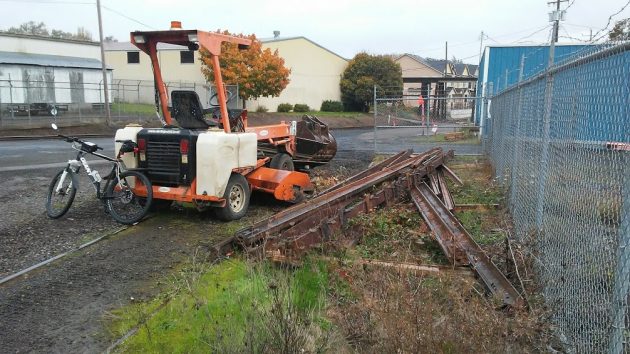 Rails from an old spur in Water Avenue have been dug up. Here they are on Friday afternoon.

No more swerving to keep your bike tires from catching in the rails on this part of Water Avenue on Albany’s riverfront. The spur that used to slice across the street is gone.

Pacific Excavation is working on its city contract to build a sewer main along Water Avenue, and the long unused spur was in the way. So they dug it up in preparation for excavating the trench for the sewer pipe.

A century ago, the Albany riverfront was a warren of rail lines, canals, bridges, warehouses and mills. You can see this on the historic Sanborn maps available at the downtown Carnegie library. Here is a Sanborn map showing the area in the photo above, at Thurston Street and Water Avenue, in 1925. 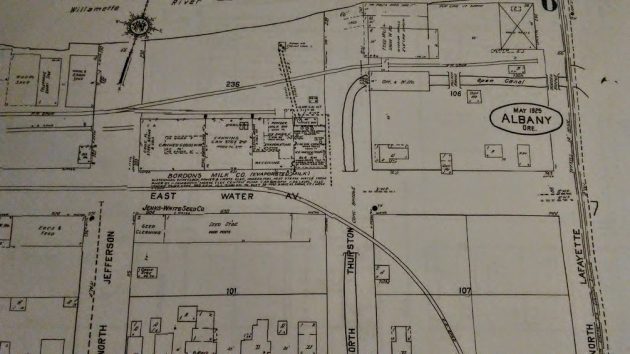 You’ll note that according to this map, the old Oregon Electric freight line, which still runs along Water Avenue today, did not exist in 1925. Neither did the spur from that line to the seed business, unnamed on this map but identified as the Jenks-White Seed Co. on a map from 1908.

Instead, there was that long curve of a line that took trains to the industries along the river from the north-south line that crosses the Willamette. The track along that curve is gone, but you can still see the outline of its shape by the gap between the buildings and fences there now.

The seed warehouse south of Water at Jefferson had been built in 1912. Brothers Scott and Spencer Lepman redeveloped it into the Jefferson Lofts apartments, which opened in 2005. No one there would ever need a rail spur again.

Rail lines slanting across streets are a menace for bikes. For years, riding along Water Avenue, I used to swerve left and then right to hit the spur at an angle blunt enough to prevent the front wheel getting trapped.

I won’t miss that risk, small as it was. I do regret that because of current necessity, another visible artifact of Albany’s railroading and industrial history has diappeared. (hh) 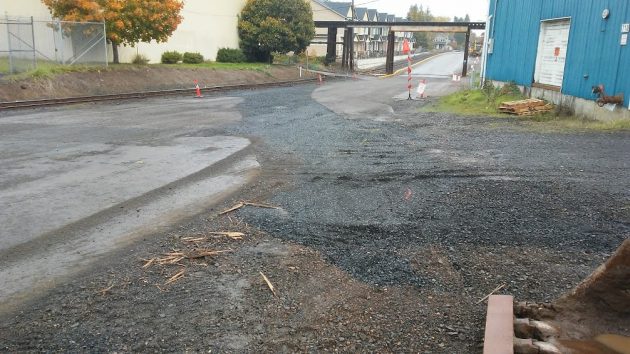 Black asphalt shows where the railroad spur in Water Avenue used to be.


One response to “On Water Avenue, rail history gives way”