On vinyl windows, another skirmish looms 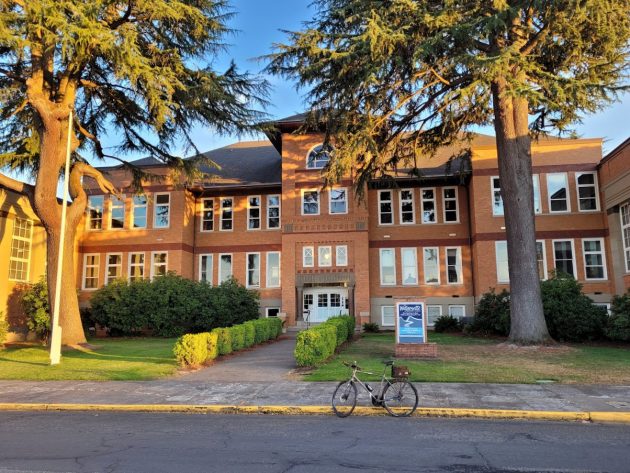 The old Albany High School on the evening of Aug. 10, facing Third Avenue.

Wood or vinyl? When it comes to replacing old windows, that has been a recurring battle between owners and regulators in Albany’s historic districts for decades. The latest skirmish takes place Sept. 1, when the city’s Landmarks Commission holds a public hearing to review the use of “substitute materials” at the old Albany High School, 420 Third Ave. S.E.

Built in 1909 and expanded with a gym and an auditorium in 1930, the old high school is one of Albany’s most historic structures. The First Baptist Church bought it in 1964 and has maintained it since. The building houses the church, begun in Albany in 1867 and now called Willamette Community Church, as well as the Albany Christian School.

The building has 242 windows in all. Twenty years ago, the church started replacing the 156 that stuck, leaked or otherwise needed replacing. Now they are in the third phase of this long project, replacing the last 34 with thermo-pane glass in PVC vinyl sashes. The wooden frames remain.

This vinyl venture, however, has come to the attention of the city, which stopped the work on July 16 with 11 windows still to be done. The church now is asking for approval in retrospect so the window contract can be completed. The church says the contract was for $55,000, 80 percent of which it has already paid.

Cost is always a factor in the wood-vinyl debate. The church says the replacements have averaged between $1,550 and $1,650. The installer has told them that comparable wooden windows would run around $3,150.

In its application, the church makes several points.

One of them is that the three ornate windows above the entry are not among those being replaced. Nor is the arch-shaped window in the attic.

Another is that the replacements imitate the three-panel window design of the auditorium and gym.

You can look up the application in the notice of the public hearing, which the city posted on Aug. 9 and where I got the information for this story.

I can’t predict how the Landmarks panel will react in this case. I do know that every time I’ve admired this venerable old school, I never noticed what the window sashes were made of, and I’ve always thought it is among the most handsome buildings in town. (hh)


18 responses to “On vinyl windows, another skirmish looms”