On the way to the coast, a slight delay 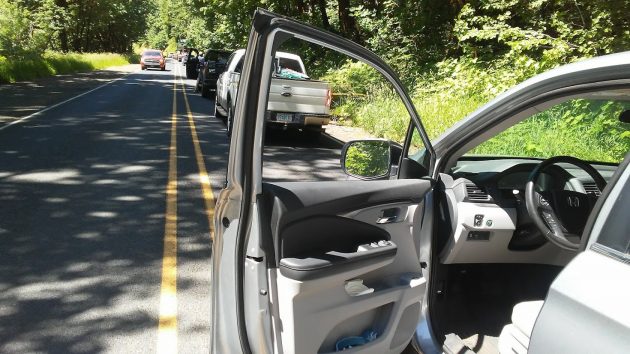 On June 18, waiting in a line of vehicles on Oregon 34 about a dozen miles from Waldport.

If you’re taking Highway 34 to the coast to escape the Willamette Valley heat this week, be aware of the possibility of delays as you get within a few miles of Waldport.

Since the first of June, a contractor for ODOT has been repaving an eight-mile segment of the two-lane Alsea Highway, starting from milepost 7 and working eastward toward milepost 15.

The  contractor is Road and Driveway out of Newport. The job is costing about $1.5 million and is expected to be finished by June 30.

They are paving the road in sections, doing one lane first and then the other. Traffic is restricted to whichever lane they’re not working on.

ODOT cautions drivers to expect waits of up to 20 minutes. In our case last Friday, it was much less, though it always seems longer when you’re sitting in a line of stopped cars and can’t tell how long the line is.

In 2018, ODOT declared the Alsea Highway to be a scenic byway, and by that they meant the stretch from Marys Peak to the coast. I worried at the time that this might ruin a perfectly fine road by attracting hordes of tourists in lumbering RVs, all driving slowly while gawking at the hills.

Luckily, that hasn’t happened. Not yet anyway.

But as the current paving project illustrates, ODOT has done a fine job in recent years keeping this winding road in great shape. So if you have to wait for a little while until the flagger lets you go through, keep the result in mind. (hh)


3 responses to “On the way to the coast, a slight delay”