On the riverfront: Wheelhouse news 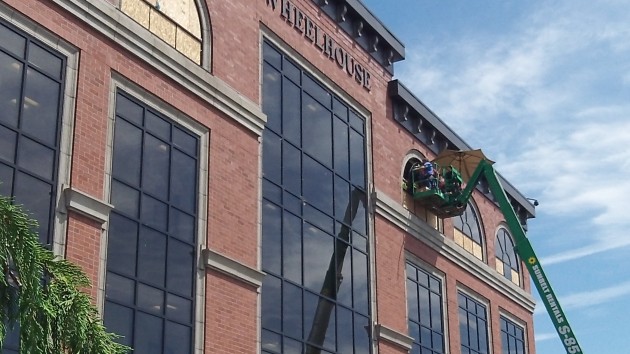 The south windows on the top floor of the Wheelhouse were repaired in June.

The riverfront is my beat, as I believe I have pointed out from time to time, and there’s news from the Wheelhouse.

A month ago, riding past on my bike, I happened to notice workers replacing the windows on the top floor of this Albany landmark on the Willamette River, completed in 2010 at a cost of $7 million. I wondered about that and left a message on the Wheelhouse Event Center’s Facebook page.

The reply arrived today: “They were leaking and so we had them re-sealed. They are good to go now.” But there was more, and this was the news: “We will be building out (the) 4th floor into offices beginning in February. We have tenants waiting for space, so after January we will no longer have 4th floor as a venue, just (the) first floor. Exciting times at the Wheelhouse!”

On the phone, event center manager Janet Johnson, whose husband Dave had the Wheelhouse built, told me they plan to divide the fourth-floor space into four office suites, one large one, two small ones and one mid-size. They’re negotiating with prospective tenants for two of the suites. Whoever works in those offices eventually will have not just a fine address in a handsome building but also the best view in town.

The first floor, originally planned to house a restaurant, will continue to be avaiable for events, and Janet says it’s better suited for that than the top floor because its access is separate from the rest of the building.

As for the top-floor windows, Dave called back to explain that they had started leaking when strong south winds drove rain against them. The subcontractor who installed them is no longer in business, he told me, but the general conractor, Gerding Companies, stood behind the work and paid for the fix. (hh)

4 responses to “On the riverfront: Wheelhouse news”