On the riverfront path: Fire in a big tree 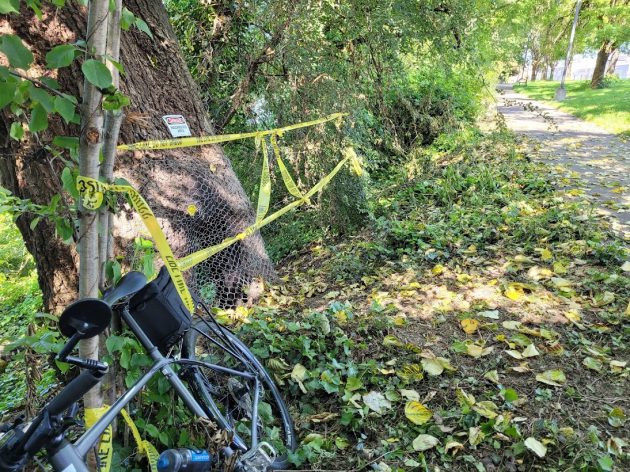 By the side of the Dave Clark Path, there’s this fire-damaged tree.

If you go west on Albany’s Dave Clark Riverfront Path, on your right just before you cross under the Lyon Street Bridge you see this partially burned-out cottonwood trunk .

The inside of the hollow trunk is blackened by fire. For a couple of weeks or so, the hole has been protected by chicken wire, presumably to keep anyone from exploring the inside. A “danger” sign has been tacked to the tree, and there’s yellow caution tape to keep people out.

What’s the story here, I wondered every time I went past there. Then I finally asked Rick Barnett, my usual resource on issues involving the city parks. He is in charge of parks and facilities maintenance, and he’s also the city’s go-to man on questions of trees.

What happened was that a few weekends ago, the middle of the hollowed-out trunk caught fire, and the fire department responded — twice — to put out the flames. Nobody knows just how the fire started.

The fire burned down to about 5 feet below ground, but the trunk is still standing and the tree is still alive. There was one branch hanging over the path, and the parks department paid a contractor about $700 to take it down.

Removing the whole tree is not planned, at least not yet. The cost has been estimated at close to $10,000. The city does not appear eager to spend that money, especially since the tree is not even on city property. Also, it’s leaning toward the river. If it falls, in the Willamette River is where it will splash down.

This is “one of he more interesting tree issues I have run across,” Barnett said. “While multiple state agencies regulate the river, when it comes to problems that cost money to fix along the river, they are pretty silent.”

Albany has been planning on a big riverfront redevelopment project, which includes some work on the bank. Maybe this tree can be taken care of when work on that project starts, now expected in 2023. (hh) 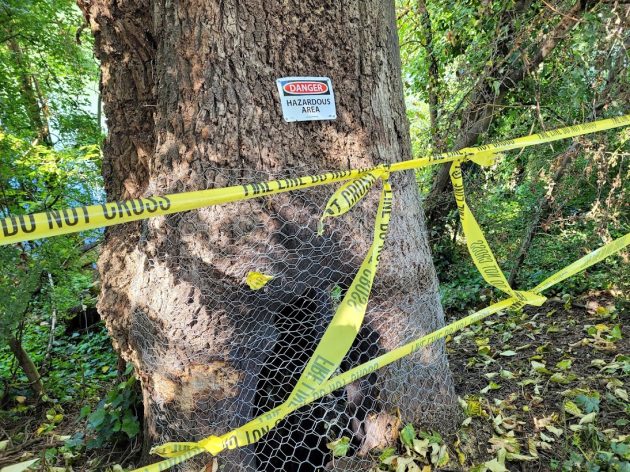 A sign, tape and chicken wire are supposed to keep people away from the damaged tree.


12 responses to “On the riverfront path: Fire in a big tree”