On the riverfront: Noticed something going on – Hasso Hering

On the riverfront: Noticed something going on 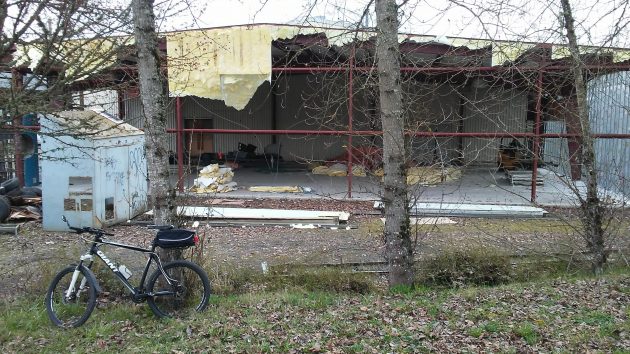 There’s something in the works off the Dave Clark Riverfront Path, just west of the railroad trestle, and it may have something to do with Albany’s waterfront redevelopment project. Or it may not.

There’s been a metal building there for decades, an addition on the back of a former warehouse and automotive-type business at 755 Water Ave. On Monday afternoon, I noticed that the metal walls of the addition were gone and only the skeleton and roof remained.  I stopped and inquired and found a couple of guys at work taking the components apart.

They told me they were taking the addition down — just the addition, not the main building — to make room for a park. Really? They didn’t know any more than that, saying that’s what they had heard and they were doing the job for a friend.

I couldn’t find the owner of the property, which the men called a body shop. Through the open doors of the main building, you can see several old vehicles in various stages of being taken apart, or maybe being put together again. Outside there are two or three remnants of what look like dirt-track race cars.

The property adjacent to the back part of the Water Avenue warehouse on its west side is owned by the city of Albany. On the other side, there’s the railroad trestle and then Edgewater Village, where dozens of new homes are getting close to being finished.

Albany is launching a project to design a redevelopment plan — and then carry it out — for the parks and other Willamette riverfront properties that it owns, including the parcel adjacent to the warehouse addition now being dismantled.

Does the dismantling have anything to do with the park development? Maybe we’ll find out Thursday (March 5), when there’s a public open house about the project. It’s from 4 to 6 at the Albany Senior Center, and it’s billed as an “opportunity to share your ideas for what you want to see in a new waterfront park.” (hh)