On the riverfront: More homes going up 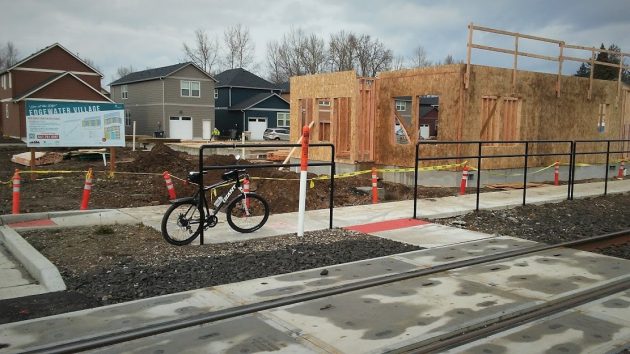 On Friday afternoon, the view of Edgewater Village from Hill Street and the tracks along Water Avenue.

Along the Albany riverfront — my beat, if you’ll remember — home construction has entered another phase at Edgewater Village, and a long-planned apartment complex is still in the works farther east, near Bowman Park.

At Edgewater Village, Baldwin Construction of Albany has just finished four new houses overlooking the Dave Clark Path and the Willamette River, bringing the total to six in that row.

This week, the contractor began work on the foundations for townhomes backing up to the Water Avenue railroad track west of Madison Street. Some 28 townhomes will be built in that section of the development, 12 along the track, 10 overlooking the river, and six in the middle. And east of Hill Street, the walls have started going up on the first of five houses.

All of that is in keeping with plans announced in April 2018. That’s when the Albany Revitalization Agency (or CARA) changed the terms of previous agreements to allow developers George and Paula Diamond to secure nearly $10 million in private bank financing in order to finish the project by the end of 2020.

The Edgewater Village literature calls it a 60-home development. (The plan actually shows 58 lots with dwellings on them. If two of them are duplexes, that would make the figures work out.)

Meanwhile downstream, east of Geary Street and Bowman Park, on another former industrial site, Willamette River Holdings LLC of Salem has been putting together plans for a riverside apartment complex. According to the site plan, the complex is to be called The Banks.

One of the principals, Patrick Morley, told me the number of planned units had been scaled back to 96 apartments and nine townhouses in response to neighborhood concerns, and the buildings would have three stories instead of four.

He expected a site plan to be submitted to the city this week. We’ll know the details when the planning department deems the plans complete and puts out a notice to nearby property owners and the public at large. (hh) 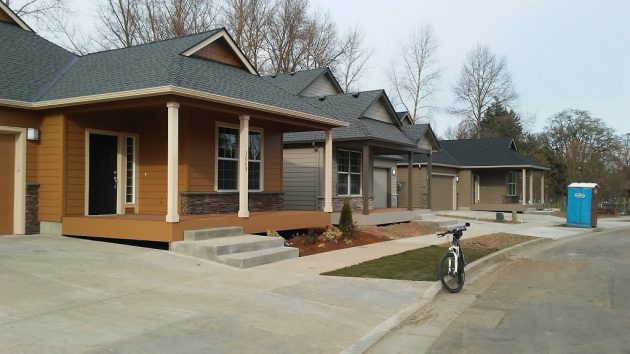 Three of the four newly completed riverfront houses at Edgewater Village on March 14.

4 responses to “On the riverfront: More homes going up”