On the riverfront, ‘an exciting change’ 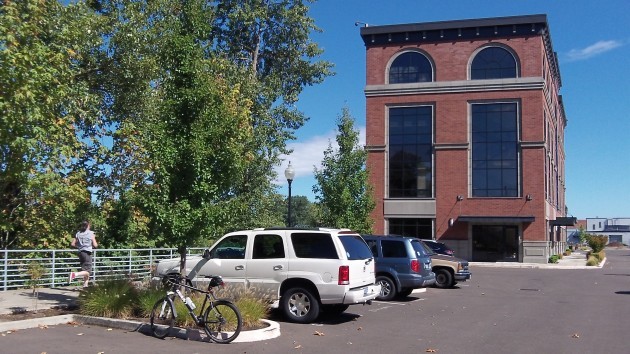 The Wheelhouse in a shot from last September.

My riverfront beat is rarely quiet for long: Saturday night, it turns out, was the last time a scheduled wedding was held at Albany’s Wheelhouse because it no longer will serve as an “event center.” That’s the word from Janet Johnson, who along with her husband, Dave, owns the landmark building on Water Avenue.

“We will no longer have events at the Wheelhouse,” she told me in an email. “The Wheelhouse is a tenant building only after tonight.”

The fourth floor has been built out and there are two tenants on that floor, she reports. “We have Waddell and Reid and NMR (Nelson MacNeil Rayfield Trial Attorneys).” Waddell is a financial-services firm. “We have two offices left, one on the second floor and one on the fourth floor, available for new tenants. All other offices are full.” She lists the other tenants as Barrett Business Services, LoanStar,  Chamberlin House, and Dental Alliance Holdings (Oral Biotech).

I wonder about perhaps holding events such as weddings on the ground floor, still largely vacant and once envisioned as a riverfront restaurant in place of the old Buzz Saw, which closed years before the Wheelhouse rose on the site. Janet explains why that’s not happening: Weddings are booked a year in advance, “and we would rather have offices and the space available when someone wants it. Not too many people are willing to wait a year to begin their build-out, and I could never cancel on someone. That would kill me.”

On the ground floor, then: “We have an insurance agent wanting a small office, and we have one door off the main entrance of the building into the first floor, Suite 1100, and that would be perfect for him. We are going to build that area out and then leave the other area for someone, ideally a physical therapist, to come in and build something out themselves. That remaining area would have its own entrance, and access to the riverfront and it would be the last/only area that we will leave somewhat unfinished, as it has finished walls and a complete bathroom area.”

The Johnsons completed the Wheelhouse construction in 2010 at a reported cost of about $7 million. For those of us who now and then got a chance to attend a reception on the fourth floor with its stunning views, or even an open house at ground level, the end of such events may be an occasion for regret. But for the owners working for years to find long-term tenants, it obviously is, as Janet puts it, “an exciting change.” (hh)


3 responses to “On the riverfront, ‘an exciting change’”