On the riverfront, a new convenience 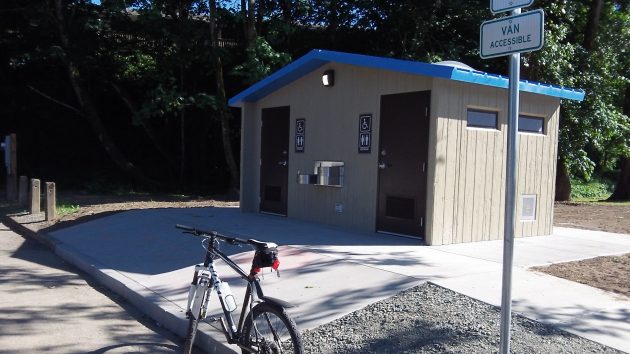 On Tuesday, those doors were still locked.

For a few weeks now, Albany’s Bowman Park has sported a fine new restroom, but it hasn’t been ready for use. Completing it has taken longer than expected, but the wait may be over now.

The facility was installed over the winter and spring at the cost of about $116,000, three-fourths of which was covered by a grant from the State Marine Board. In April the parks department told the local paper that it was expected to be ready by mid-May, but as of June 21 the doors were still locked.

When I inquired about the delay, Parks and Recreation Director Ed Hodney told me late Tuesday via email: “Took longer than expected to complete the electrical  and concrete ramp to the new building. Just waiting for final electrical inspection… I believe that inspection was scheduled today.”

This little two-room building replaces a dank old restroom back under the trees in the riverside park. The new location, practically on the parking lot and highly visible, should discourage the vandalism and other problems at the old one. Its arrangement and signage, common now in park restrooms, also avoids any complications over “gender identity.”

Visitors to Bowman Park were not necessarily inconvenienced by the delay in getting this place ready for use. The parks department had thoughtfully arranged for a portable restroom across the parking lot. (hh)