On the riverbank, an unexpected cleanup 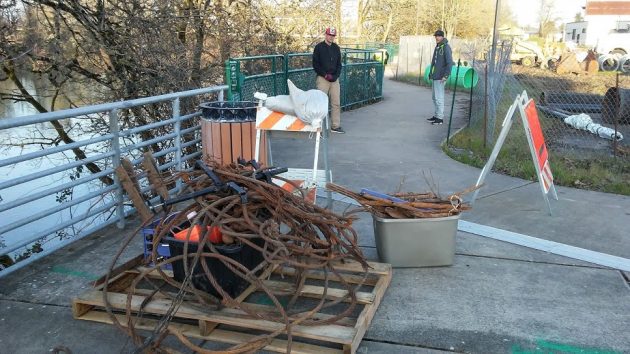 This is some of the junk Jonathan Wood, left in back, and his helpers hauled off the riverbank.

Here’s what I saw on the Dave Clark Riverfront Path on Friday afternoon: A group of guys hard at work cleaning the path of piles of rusted junk they had spent the day recovering from the riverbank below.

No offense, but the guys looked like they might be among Albany’s homeless and had spent a few nights outdoors. They made room so I could get through on the bike. I went on my way, but then I doubled back to take another look and see what was going on.

By the time I got back five or 10 minutes later, the junk was neatly piled up, ready to be transported, and somebody was taking a broom to the path to sweep it clean.

I talked to one of the group, Jonathan Wood. Yes, he told me, he had spent some time living on the riverbank and noticed, obviously, all the junk accumulating there. So he and the others were doing what they could to clean the place up.

He wrote down for me the names of two of the group who had joined him in Friday’s effort: Tim Parker and Sossity Rowell.

As I understood them, they were planning to take the stuff — rusted steel cable and various bits of pipe — to Burcham’s metal recycling operation.

I thanked them for their effort and wished them luck. (hh)


4 responses to “On the riverbank, an unexpected cleanup”