On the river: Check that pile of debris 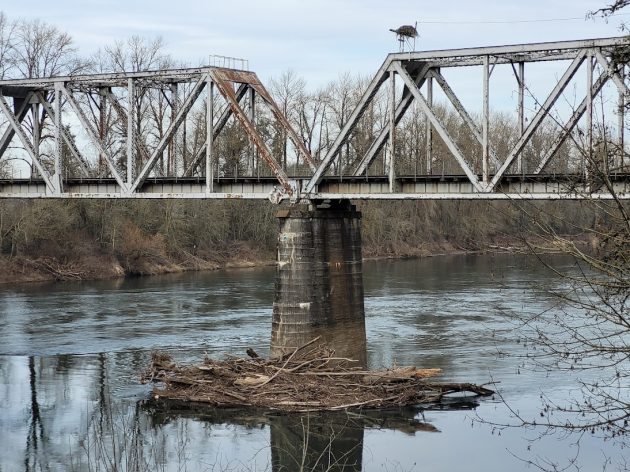 Every winter, or so it seems, logs and other debris drifting down the Willamette River pile up against a pier of the Albany railroad bridge. It looks like trouble, but at this point it worries neither the railroad nor the Oregon State Marine Board.

The pile sometimes attracts the notice of people on the Dave Clark Riverfront Path, and recently someone asked me about it.

In 2012, the Portland & Western Railroad hired a contractor to break up an even bigger accumulation of debris against the round center pier of  the bridge. At the time the Marine Board had been worried about river safety, and the railroad was concerned about preventing scouring at the base of the pier.

This week I checked with the railroad and the Marine Board about the current pile, which has built up against the pier closest to the river’s right bank.

“The log jam in question does not pose a current safety threat, particularly given the concrete base structures supporting the bridge,” Tom Ciuba, a spokesman for the railroad, told me. “Portland & Western Railroad (PNWR) regularly inspects the bridge — and all its bridges. It is structurally sound.”

“The woody debris accumulation on the railroad bridge is not obstructing the navigable channel and is able to be navigated by recreational boaters at this time,” Paulsen told me in an email. “There is good visibility up and down the river for a boater to change course if needed at this time as well.”

He also said he had checked with the marine patrols of the Linn and Benton County sheriff’s offices, which monitor the situation.

According to Paulsen, the Benton County marine program often cuts the logs in the spring. “It is also worth noting that the bridge owner (railroad company) generally goes through in the spring with a crane and removes the debris.”

Conclusion: On the river, steer around this pile. Otherwise, don’t worry about it. (hh) 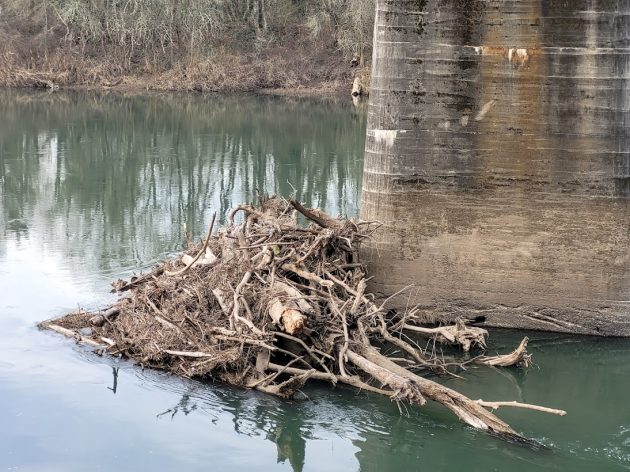 A closer look at the debris pile from the bank under the bridge.


3 responses to “On the river: Check that pile of debris”