On the railroad, testing the track for flaws

When it comes to railroads in the mid-valley, there’s often something interesting to see. On Wednesday afternoon, for instance, you might have spotted the Federal Railroad Admnistration inspecting the former Oregon Electric track from Albany south. Or you might have seen the inspection train rolling across Riverside Drive, as in the brief video above.

I happened to see the train — two cars pulled by a BNSF locomotive — crawling along the track where it goes past the Riverside Cemetery. Then it stopped, and from a distance I could see a red glow under the car at the end. No idea what that was, but it looked like maybe the workings of a laser.

By the time I got close enough to read the lettering on the cars — Federal Railroad Administraion Office of Safety — the train took off again. I jumped in the car and got to the crossing on Riverside, about half a mile down the track — just before the crossing arms came down. 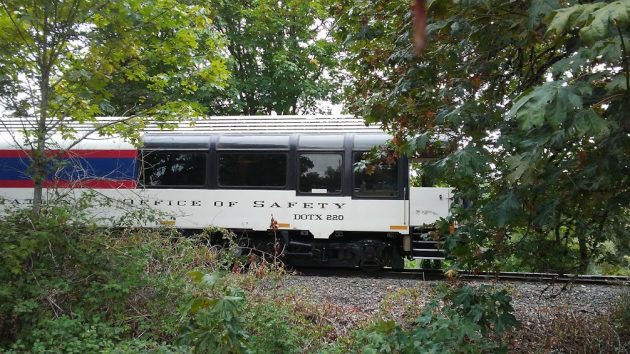 What I had seen, Bob Melbo of ODOT Rail explained, was one of the FRA’s “track geometry cars.” As the term implies, this rig “measures all kinds of things relative to track structure and helps to identify any potential defects.”

In case you’re interested, the FRA has put descriptions of its geometry cars on line. This one, the DOTX 220, measures track parameters such as “gage, alignment, track surface (crosslevel, warp, profile) and calculates limiting train speed in curves.” The car has various non-contact sensors, and if they sense any defects, the apparatus notes the location via GPS.

The car, the Railroad Administration says, “computes track geometry parameters at speeds of up to 125 miles an hour.” Ha! Not on any line in western Oregon including the old Oregon Electric, even though in the Albany area that track gets regular maintenance from the Portland & Western, which leases it from BNSF. On our Oregon railroads, train speed is much more sedate.

This track-testing car is about 85 feet long and has seating for 20, including four in the data analysis area. It also houses a kitchen, a biological toilet system, coat and luggage closets, and lockers for the crew. With all that and the computers, the whole thing weighs about 100 tons.

Did this testing Wednesday find any defects in the track? No way to find out, but one assumes they’ll let the operating railroad know. (hh)


2 responses to “On the railroad, testing the track for flaws”