On the Ellsworth Bridge, no overhead lights 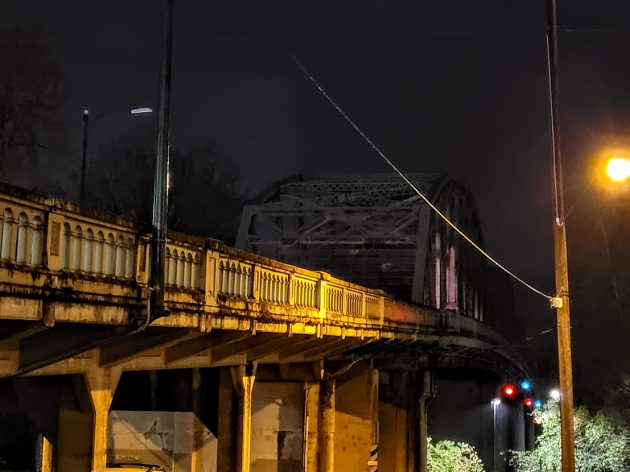 The Ellsworth Street Bridge as seen from First Avenue on Friday night.

Driving into Albany on the Ellsworth Street Bridge on Friday night felt different, somehow. Then I saw the reason: All the overhead lights on the bridge were out, plunging the deck into darkness cut only by the headlights on the truck.

The cross beams on the steel superstructure have light fixtures attached to them. And normally they more less illuminate both driving lanes below.

On Friday night about 8:30, they were out. Not just one or two. But all of them, which I had never noticed before. On this December night, the entire superstructure loomed black in the misting rain.

Did a fuse blow? Or a wire snap? Who knows?

Strangely enough, the red and green navigation lights on the bridge piers, marking the Willamette River channels on the downstream side, were operating fine, as I noticed when I took the photo above from the parking lot off First Avenue.

Sooner or later, ODOT may get word of the blackout on the bridge itself and send somebody to fix the lamps. One presumes. (hh)


16 responses to “On the Ellsworth Bridge, no overhead lights”