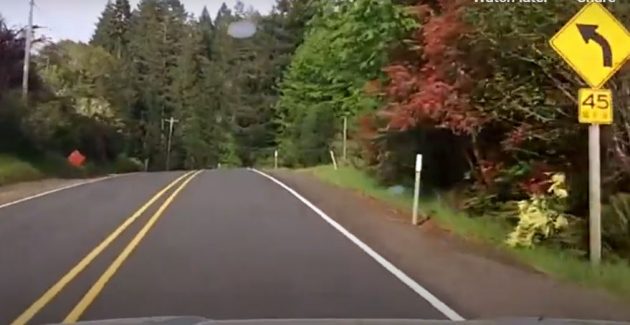 This is a curve advisory speed sign on OR 34, and ODOT says it wants to upgrade signs like this between Waldport and Philomath starting in 2021. But how will they keep this change from giving drivers the wrong idea?

If you’re like most drivers, experience over many years has taught you that the speed the signs advise can safely be exceeded by about 10 miles per hour.

The transportation department explains that the Federal Highway Administration has required that all curve signs meet current standards, and 50 percent of such signs in Oregon don’t.

“This is,” the agency says, “because of outdated technologies used in initial curve analysis, changes in driving habits, improvements in vehicle safety features, and inconsistent curve advisory speed changes that have happened over the past several decades.”

So now, the new signs presumably will account for all this and advise us that we can drive faster and still get around those curves.

You can see the problem. Drivers accustomed to the current signs will assume that safe speeds are still about 10 mph faster than whatever the signs say. So how many cars are going to fly off the road in the curves or slide into the opposing lane?

ODOT must have thought of that. And maybe they have a way to prevent problems once the new signs are up. You can see it now: “Arrow/50 mph/WE MEAN IT!”

The illustration for this story is a screen grab from a video I shot in 2018 after the road between Philomath and Waldport was declared a “scenic byway.” (You can read it and see the video here.)

I’m on that highway fairly often and can’t wait to see what the new curve signs will advise once they are installed. (hh)