On the blink: Ellsworth bike-on-bridge lights

Crossing the Ellsworth Street Bridge in Albany on a bicycle can be a bit of a thrill. To make it less risky, ODOT installed a system of flashing lights when the bridge was rehabilitated in 2002. (To make a long story short, the lights are out but were supposed to be fixed shortly, as indicated in the updates at the bottom of this story.)

On the approach to the bridge there is a button by the side of the highway. Cyclists can hit it to activate two flashing lights. The lights let motorists know that a bike is on the bridge.

On Tuesday afternoon, I stopped to push the button. Nothing happened. And as you can see in the video above, nothing happened again when I repeated the maneuver for the sake of videography.

I emailed Ron Irish, the go-to guy at City Hall on anything having to do with traffic or streets. He emailed back and reminded me that the lights are ODOT’s responsibility.

“A resident reported this problem to me yesterday,” he wrote. He forwarded the message to ODOT and was told that “someone would check it out shortly.”

How long the fix will take probably depends on the cause of the problem, whether it’s just a couple of bulbs that have to be changed, or something more involved.

So why, you ask, do people on bikes not simply take the Ellsworth Bridge sidewalk? Because it’s made for walkers, and because it’s too narrow to accommodate both pedestrians and bikes. Also, a cyclist rides way above the height of the railing, and a mishap — as in trying to squeeze past pedestrians — might pitch him into the Willamette River below. (hh)

Wednesday morning (3-20-19) update from Ron Irish: “Just got a call from our Street Department. Someone over there apparently follows your blog. The flashing bikes-on-bridge lights were damaged by a truck with a boom. That same truck also damaged several bridge lights that are the City’s responsibility. Our Street Department discussed with ODOT how best to fix/replace the damage. We offered to fix the bikes-on-bridge light while we were out there, and ODOT agreed. The repair work is scheduled for this Thursday/Friday.”

Friday update: Based on the email quoted above, I checked  on Friday afternoon (March 22). Nope, the lights had not been fixed. But, lights or no lights, thanks to courteous and careful drivers I once again made it across unscathed. 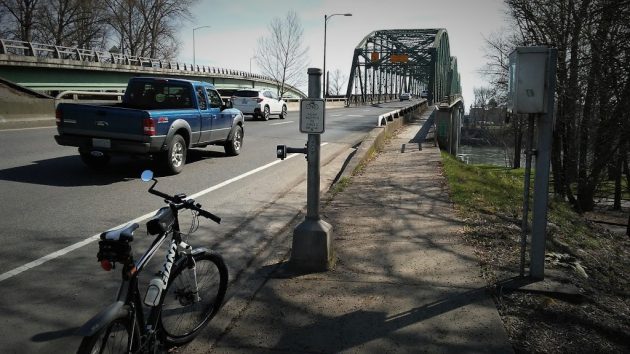 
11 responses to “On the blink: Ellsworth bike-on-bridge lights”