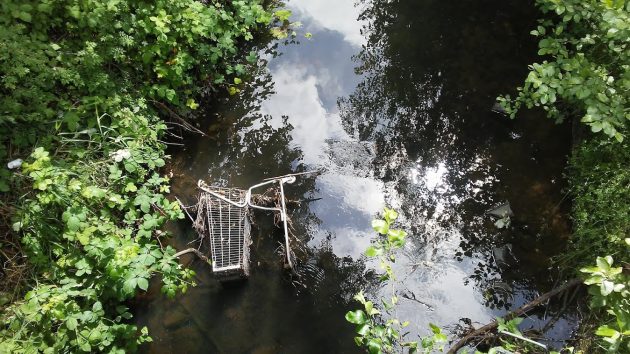 An abandoned shopping cart lies in Periwinkle Creek. The photo was shot in May 2020.

It was 13 years ago that Albany passed a law to get rid of abandoned shopping carts. It hasn’t worked. And now the city council is poised to try again.

At its meetings on Monday afternoon and Wednesday night, the city council will be asked to consider and pass changes in the shopping cart law it adopted in May 2008.

Among other things, the proposal would require stores that offer their customers carts to post signs that taking a cart off the premises is a crime under Oregon law. Stores would also have to “establish and maintain a shopping cart retrieval group.” And they would have to pick up abandoned carts within 72 hours after being notified.

Cart owners could be fined $50 if they fail to retrieve a cart. The 2008 law has the same fine, but if it’s ever been imposed it hasn’t been reported.

Shopping carts being dumped or just left on the curb are a common sight.

The police department’s community service officers do what they can. I asked Holly Roten at City Hall to summarize one recent action:

“On February 10,” she reported, “the Albany Police Department did a shopping cart push leading up to a possible code change.  APD recovered over 40 shopping carts throughout the city, in a couple of hours, and many of those carts were in waterways.  APD has even purchased grappling hooks to pull them out of waterways.

“(Community Service Officer) Darla Luther has been working on shopping carts for the past six weeks or more trying to get stores to participate in removing the blight with minimal successes. APD is continuing to make these pushes until stores are taking responsibility for recovery.”

Under existing law, the city has to store any unidentifiable carts it salvages for 30 days, which adds to the workload and the need for storage. The amendment would allow such carts to be disposed of right away.

In a memo, Code Compliance Officer Kris Schendel told the council: “As part of the city’s continuous efforts to maintain clean neighborhoods, staff seeks to ensure that the process for dealing with abandoned shopping carts is timely and efficient.”

The proposed code changes are intended to achieve that. We’ll see in due time whether they work. (hh)