On Second, will radar slow drivers down? 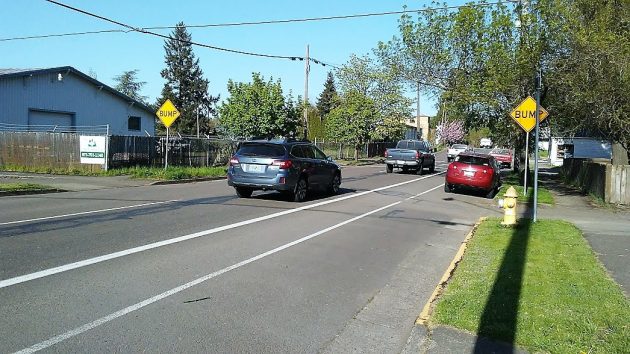 The radar sign would to go right about here, a block west of the Second Avenue railroad hump.

Drivers on Albany’s Second Avenue will soon be seeing something new to catch their attention. The city council Monday called for the installation of a radar speed display sign on Second at Thurston Street, a block before vehicles go over the hump of the railroad track.

The speed limit there is 25 mph. Transportation Systems Analyst Ron Irish told me a Neighborhood Watch group had been complaining about speeding on the east-bound one-way street.

The police department has a radar speed display sign and was looking to install it but wanted council concurrence first. The issue was whether to put it up temporarily or permanently. (This is a sign on a pole, not the speed trailer the police deploy from time to time.)

The engineering staff told the council that the sign is too large and heavy — with solar panels, the radar setup and so forth — to be put on an existing or temporary pole. It would need to be on a pole 15 or 16 feet high and set in concrete.

But the council liked the temporary idea and left it up to Public Works to figure out how to accomplish that. Councilor Rich Kellum said the idea is to test such a sign (the first in the city though two were set up by Benton County on Spring Hill Road in 2016) and see if it works in slowing traffic down.

Signs of this kind display the speed of approaching vehicles, but they don’t take photos, and there’s no risk of a ticket.

The railroad hump on Second, I thought, would have served as a natural speed bump. Maybe it does with mature drivers, but Irish told me that gouges on the pavement on other side suggest what some drivers have done: They went fast enough over the hump to get airborne.

If that is the main problem, you might think that the radar sign could actually make things worse by egging drivers on to see how far they can make their rigs fly over the tracks. The sign would tell bystanders: Look how fast I can go!

In the video below, I misspoke: The radar sign will be one block west, not east, of the railroad hump.

Also in the video, the motorcyclist coming to a stop at the end is Mike Milligan, who with his partner runs Albany Shoe Repair just on the other side of the track on Second. Milligan told me that speeding really is a problem there.

Whether the radar sign will have any effect will have to be seen. But to make this test worthwhile the city first will have to get data how how fast the traffic moves now.

As for the cost associated with this project, I didn’t hear anyone say exactly what it was. (hh)


10 responses to “On Second, will radar slow drivers down?”