On Railroad Day, service in doubt

Written May 9th, 2015 by Hasso Hering
Comments: no responses.

Saturday was Amtrak Railroad Day in Albany, as the video shows, and at Albany Station people could look at a few displays and pick up some swag. But the future of expanded passenger rail in the Willamette Valley is anything but a sure thing. 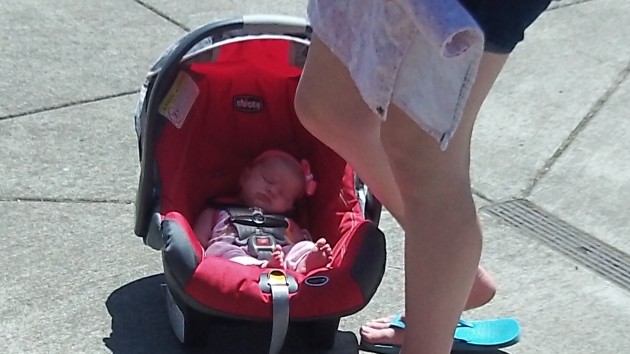 Will there still be passenger trains when this baby grows up?

The Oregon Department of Transportation needs an additional $10.4 million to keep the Cascade passenger trains going for the 2015-17 biennium, but so far the legislature’s Ways and Means Committee, which writes the budget, has not agreed to that amount.

There’s been talk of approving $5 million and runing the trains for at least a year to see if ridership will stop its recent slide and go up again. But that would probably be pointless. Why would anyone expect ridership to increase on a service that people have been told will end?

ODOT still has hope that legislators will find the money to continue the Cascade train service for the full two-year period. That would offer a better chance to attract more passengers, especially if the price of gas see-saws back up and traffic jams and long delays become an even more regular thing on I-5 heading to Portland.

The state helps fund only the runs between Eugene and Portland, using Talgo trainsets. The daily interstate Coast Starlight is an Amtrak-only operation and not affected by the Oregon budget.

Meanwhile, nothing has been heard lately from the drawn-out process picking a route for a potential improvement in train service with faster speeds and more trains. That planning process — a preliminary environmental assessment — is required for more federal funds later. The planning started in 2012 and probably won’t be finished until 2017 or so, and it was originally budgeted for about $10 million in state and federal funds.

In a sane system, this time and money could have been saved by simply deciding that double-tracking the existing mainline would do the job. It would accommodate more freight and passenger trains, preventing delays and allowing more frequent service. And the money for the study could have been applied to keeping the current service afloat and letting the public know how good it is. (hh) 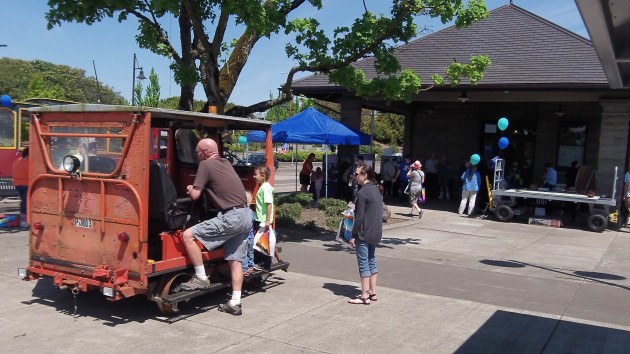 This jitney on display was a reminder of railroad work back in the day.