On Periwinkle Path, a big pile of trash 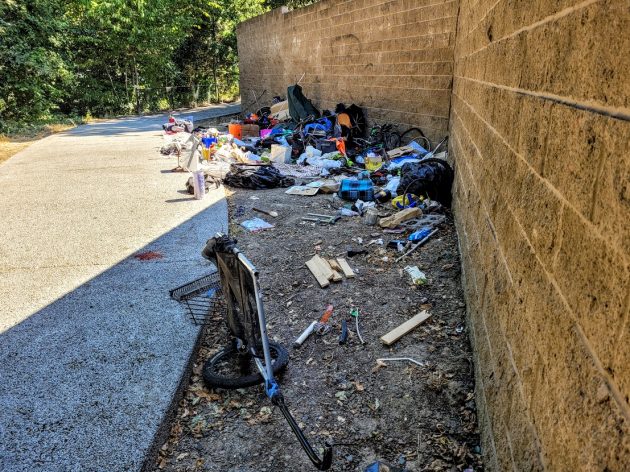 One short segment of the Periwinkle Bike Path looked like this on Sunday.

On Facebook last week, someone posted photos of a mess on the Periwinkle Bike Path in Albany. The mess was still there Sunday afternoon, when I went to take a look.

If you have a couple of minutes, you can follow my short look-see ride on the video below:

If you watched it, you saw that the mound of bike parts and assorted other items had been piled up along the side of the newest part of the path, the one constructed after Lowe’s built its home improvement center at Ninth and Oak in 2015.

When I went by there Sunday, another man had had just arrived on his bicycle. I asked him if the stuff piled there was his, and he said no, it was not. But he told me he planned to get the site cleaned up, so I should come back in a week and take another photo.

I didn’t hear or understand everything he said, but if he does intend to work on clearing the spot, I don’t know where he intends to take all that discarded stuff.

Scenes like this might be an argument against building any more off-street paths until vagrancy is no longer much of an issue. Why provide vagrants with an easily accessible place to mess up with their leavings?

But this particular mound of trash is not typical of conditions along Periwinkle Creek or Albany’s other off-street paths. On Sunday, the rest of the Periwinkle Path from Ninth to Queen Avenue was perfectly clean. All previous evidence of vagrancy or camp sites along the path and the creek was gone. (hh)


4 responses to “On Periwinkle Path, a big pile of trash”