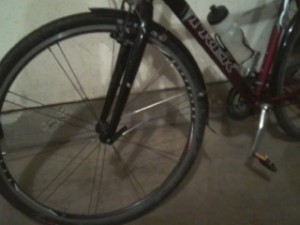 For people who ride bikes, there’s bad news from California. The governor, Jerry Brown, has vetoed a bill that would make it unlawful for drivers to pass bicyclists closer than three feet.

According to a report in Bycycling magazine, the governor said he was worried about a provision allowing drivers to cross the double center line if it could be done safely in order to pass someone on a bike. He was worried that the state might get sued if this  resulted in a head-on crash.

Jerry Brown’s rationale was baloney. The bill plainly said crossing the center lines was OK only if safety allowed it. And while anybody can sue anyone for any reason or no reason, collecting from the state of California under those circumstances would have been impossible.

In Oregon, as it happens, we have the kind of law that California was trying to get. It requires not three feet but enough space so vehicles won’t hit a cyclist who falls over, and that’s at least three feet, maybe more. Our Oregon law also allows drivers to momentarily cross the double lines if they can do so safely in order to avoid hitting the person on a bike.

In this case at least, Oregon is ahead of California in a matter of safety and common sense on the roads. And it ‘s a good idea to call attention to this safety law as more people take to our roads on their bikes. (hh)