On Pacific, from Wendy’s to weeds 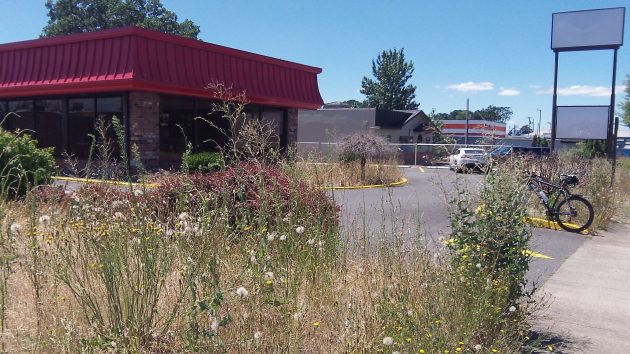 Nobody has been tending the landscaping at the former Wendy’s for a long time.

What used to be Wendy’s restaurant on Albany’s Pacific Boulevard has been closed for a year and a half, and the property has turned into a showcase of landscaping neglect.

The fast-food restaurant closed in January 2015, along with Wendy’s in Corvallis, Eugene and The Dalles. Press reports at the time cited a dispute between the company, based in Dublin, Ohio, and the Eugene-based franchise operator as a reason for the closures. If anyone is planning to reopen the Albany restaurant, or use the property for something else, I don’t know about it. When I checked with the city planning department in May, no one had filed for any land-use permits.

Linn County tax records say the property, at 1560 Pacific Blvd. S.E., is owned by a limited liability company whose agent has a mailing address in Rancho Santa Fe, Calif. The property is listed on the tax rolls as having a real market value of $1.6 million, of which $245,000 accounts for the land and the rest, more than $1.3 million, for the “improvements.”

Property taxes were assessed on a maximum assessed value of $560,570. Last fall the tax bill amounted to $10,919 and was paid in full.

My question: If you’re going to pay almost eleven thousand dollars a year in property taxes without blinking an eye, why not budget a few hundred bucks and hire a guy to water the lawn and take care of the shrubs until either the franchise problems are resolved or a new tenant can be found to operate the place?

It can’t be a shortage of money, I would think. Rancho Santa Fe is a community in San Diego County. MapQuest describes the place as “one of the most exclusive and affluent communities in Southern California. … At $245,631, it is one of the highest income communities in the United States with at least 1,000 households.”

Albany has an ordinance about keeping vegetation cut so it doesn’t become a fire hazard. But enforcement happens only once a hazard is determined to exist. And if you’re in the real estate business in the ritziest part of Southern California, it’s possible that unless somebody tells you about it, you don’t know about the appearance of an investment far away, on the main drag of an Oregon town. (hh)


9 responses to “On Pacific, from Wendy’s to weeds”