On my way with OReGO, maybe 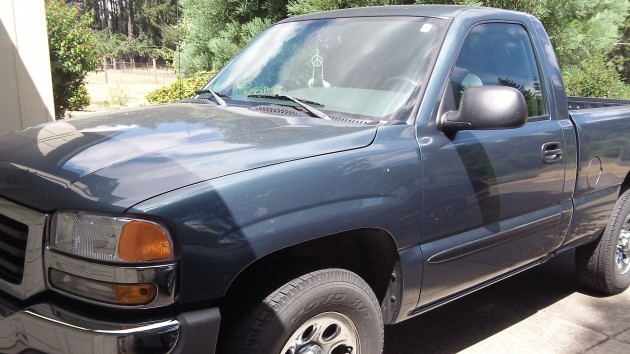 This trusty truck waits patiently for its newly installed MRD to record how far it’s gone.

After a confused start, my part of Oregon’s new road tax system may be on its way after all. We’ll see in a couple of days whether my newly installed mileage reporting device actually reports mileage, as my OReGO account manager assures me it will.

The program started July 1 by inviting volunteers to sign up to pay 1.5 cents a mile instead of the state gas tax of 30 cents a gallon. I’d been writing about this since legislators starting thinking about it in 2001, when they formed a road user fee task force. So this month I signed up my 2007 GMC Sierra, and it was accepted.

Volunteers get a mileage recording device or MRD in the mail and plug it into the data port in their vehicle. I did that last Friday and reported on the initial snags. (The device flashed a red light instead of the green light as the program’s online instructions say it is supposed to.)

Volunteers have their pick of three options to report mileage, and I chose the “ODOT/Sanef” option, which is NOT based on GPS tracking technology. (Two others, including a system called “Azuga,” do use GPS, and ODOT’s online illustration of the recording device showed only the Azuga gizmo, which led to some of my initial confusion.) The non-GPS option I chose is offered in cooperation with Sanef ITS Technologies, a “global road charging expert,” and Intelligent Mechatronic Systems.

On Tuesday I called the Sanef help line, which was answered by a young woman in New York. She didn’t know why the device flashed red instead of green when I installed it, but she emailed a page of trouble-shooting advice. As instructed, I unplugged the MRD, waited a minute and plugged it back in. Same result: Red flashes; no green lights.

Now it’s Wednesday morning, and an email arrives from my OReGO account manager: “We are happy to inform you that your GMC Sierra is officially part of the OReGO program. Your OReGO device is active as of 2015/07/11 00:00:00 UTC. You can follow your daily road usage charge and fuel credit on your online account.”

I figured that if the device was active since Saturday, it should have recorded the 30 miles or so I drove the truck on Tuesday. My online account, though, shows zero mileage. Another call to customer support. A fellow answers this time. He doesn’t know about the lights but yes, he says, the device shows up as active. But they’ve heard from others that things are not working and there’s a bug in the system that they’re working to fix. And by Monday, the mileage totals and credits should show up.

An hour later he calls back. Actually, he says, there is no problem with the device, but the reason Tuesday’s mileage has not shown up is that after the initial installation, it takes 48 hours to appear. So I’ll wait a couple of days and see.

Meanwhile, ODOT might want to revise its online instructions. Kill the sentence that says, “Plug your MRD into the port and wait for the green lights to flash.” Apparently that doesn’t apply to the Sanef device. And explain about the 48-hour delay in the first mileage reporting.

Yesterday I called up Michelle Godfrey, the helpful ODOT public information officer for the OReGO program. More than 500 volunteers had signed up, she told me. The upper limit of participaton as authorized by the 2013 legislature is 5,000. I do hope the limit will be reached soon. Oregon needs a new way of collecting road taxes, and this first-in-the-nation program is supposed to show that it works on a mass scale. For that it will need some mass. (hh)