On my riverfront beat: That leak is back 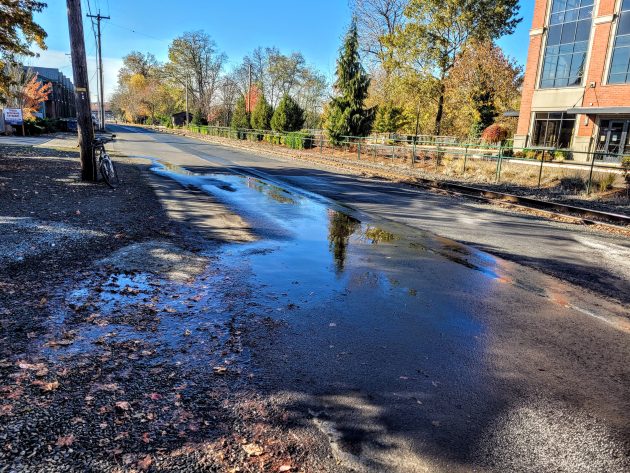 Looking west from the 400 block of Northeast Water Avenue on Saturday Nov. 19, 2022. The Wheelhouse office building is on the right; Parr Lumber on the left.

Last year it looked as though they had fixed this apparent leak in a water main along Water Avenue in Albany. If they did, the fix didn’t last.

Water Avenue along the Willamette River is on the route of most of my bike rides through town. I couldn’t miss the puddle that appeared there in recent days, a time when the mid-valley had received no rain for quite a while.

The puddle was there in the fall of 2020. It was still there in May 2021. Both times, with nothing better to do, I mentioned it on this site.

Then, though, the city’s public works department seemed to have got on top of this litte leak. But here it is, again.

There’s a 12-inch cast iron water main down there below the gravel, I was told last year. And from the way it looks on the surface, there’s a crack in the pipe, or a gap where two sections meet.

The city’s pending Waterfront Project includes, among many other changes and renovations, adding sidewalks and other amenities to Water Avenue. Perhaps the underground pipe will be replaced when that is done, some time in the next few years. (For more on that, see the end of this story.)

In the meantime, checking on the “Recurring Water Avenue Leak” will probably remain a regular feature of my riverfront rides. (hh) 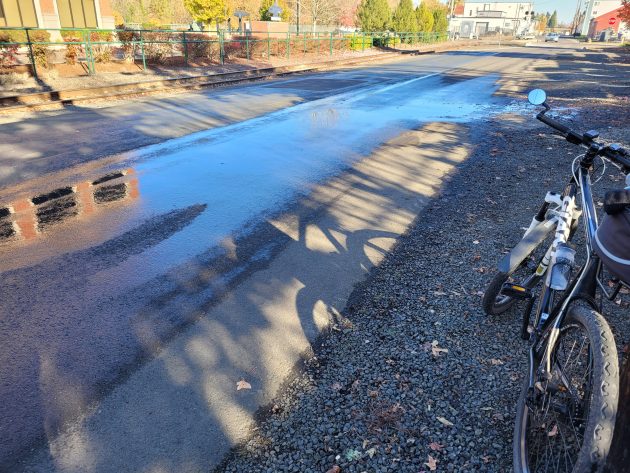 And here we look at the scene from the other side. This was on Saturday, another in a long line of dry days.

I posted this story Sunday night. On Monday morning came this from City Engineer Staci Belcastro:

“I saw your article on the water leak near the Wheelhouse and wanted to share that the Waterfront project includes construction of approximately 2500 feet of 12-inch ductile iron water line on Water Avenue.  The new pipe will replace the existing cast iron and AC water lines, constructed in 1954 and 1978.  The cast iron pipe is prone to leaking at the joints and is likely the source of the water in your picture. The CMGC contractor, K&E Excavating, has secured the necessary materials needed to construct the water line, and we anticipate construction starting by spring 2023.  The water line improvements are estimated to cost approximately $1.2 million and will be funded by water rates, not urban renewal funds.”


5 responses to “On my riverfront beat: That leak is back”