On Lyon, less space for cyclists 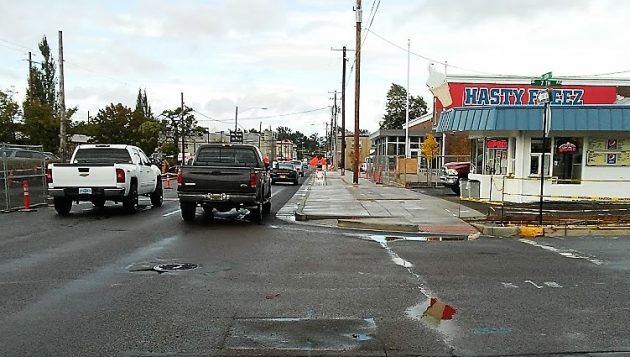 Reconstruction in front of Station 11 and a popular hamburger stand leaves little room between sidewalk and traffic.

I wonder if this is what the designers had in mind: Putting the sidewalk that close to heavy traffic in front of the new Albany Fire Department’s Station 11 and Hasty Freez, one of the best burger-and-shake joints in town.

One result of the sidewalk extension is the disappearance of the space that bicyclists were able to use to get out of the travel lane along this section of Lyon Street, the northbound leg of the heavily used Highway 20 couplet downtown.

I asked Ron Irish about this. His title is Albany’s transportation systems analyst, and he’s like the Oracle of Delphi when it comes to traffic issues. If you’re at all interested, his detailed reply is worth your time:

“Lyon has a curb width of 42 feet. The original striping was for two 13’ vehicle lanes and 8 feet of on-street parking along both sides.    Along sections where parking was restricted or not being used, cyclists could cheat over into that area but would have to shift back into the travel lane when approaching parked vehicles. I know it’s tempting, but it’s probably more dangerous for a cyclist to shift back and forth between parking areas and vehicle lanes than to just maintain a constant course.

“I’ve not seen any studies on the topic, but I do recall Michael Ronkin (ODOT’s past bike/ped  manager and one of the best bike design experts I’ve run across) advocating against the practice unless the empty parking area extended a significant distance.  Michael thought that cyclists moving back and forth between parked vehicles increased the chance of being hit by a surprised semi-attentive driver. There are no designated locations for cyclists to ride on Lyon or Ellsworth, and no way to get to a striped bike lane without removing parking on one side of the road.

“The curb widening we’re doing on Lyon at curb extensions and at Hasty Freez is 6 feet. That will result in a lane width at those locations of 15 feet. That’s less space than used to be available at locations with no parking, but more space than the 13 feet that is available along most of the corridor next to parked vehicles.

“We did make a request to ODOT for approval to install sharrows along both Lyon and Ellsworth between Ninth and the bridge(s). They approved the request. Not as good as having designated bike lanes, but probably the best we can achieve given the circumstances. Not quite sure of the timing for installation. It will most likely happen after all the curb returns are redone with the pavement overlay planned by ODOT.”

Sharrows (“share arrows”) are pavement markings to let motorists know they might encounter a cyclist in the vehicle lanes. As Irish says, they’ll be painted once Lyon and Ellsworth are repaved, probably next year. Then we’ll see how they work out, and whether cyclists would be smart to avoid Ellsworth and Lyon altogether and take detours instead. (hh) 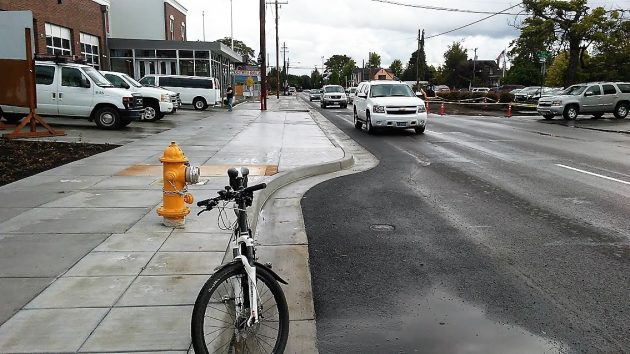 The sidewalk extension on Lyon Street looking south past Station 11.


8 responses to “On Lyon, less space for cyclists”