On Gibson Hill: The smartest fix 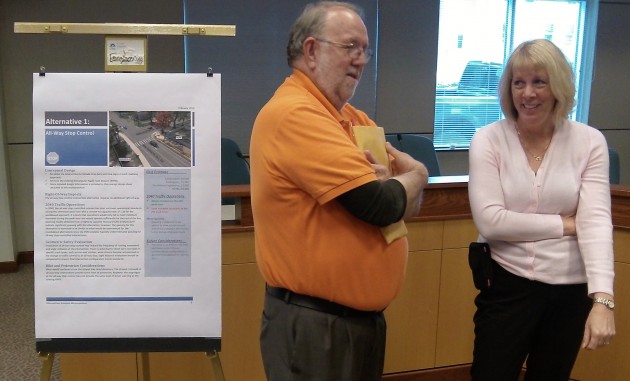 What’s the smartest way to fix the North Albany intersection of Gibson Hill Road and Crocker Lane? Floyd Collins, the Ward I councilman and North Albany resident who dealt with public works issues all his professional life, thinks the smartest way is to rebuild the intersection once and for all, not to do one thing now and then spend more money to do the final fix in 10 years.

I asked Collins, a retired Albany public works director, about this at an open house on the intersection alternatives Tuesday afternoon at City Hall. The motoring public had previously expressed itself in an online survey sponsored by the city, and hardly anybody from the public showed up at the open house. But Mayor Sharon Konopa and Councilors Collins, Bessie Johnson, Dick Olsen and Ray Kopczynski did, and so did public works staffers from Albany and Benton County as well as a rep from David Evans and Associates (DEA), the consulting firm that drew up five possible intersection treatments.

The alternatives are: Putting in an all-way stop at the three-way intersection, a simple or a more extensive signal setup, and a small or a full-size roundabout. The cost estimates range from $9,500 for the stop signs to almost $1.9 million for a set of signals with turn lanes on Crocker and Gibson Hill. The turn-lane signal alternative and the full-size roundabout would require buying some land, and the cost of that is not included in the estimates, Cameron M. Grile of DEA told me.

I turned to Collins and asked him what, in his opinion, would be the best way to go. He says it’s to consider that North Albany at build-out may hold 20,000 people, compared to about 8,000 now, many of them making several trips to and from town a day. With that in mind, he prefers doing the traffic signal with turn lanes. It’s the most expensive of the alternatives, but it would be smarter to do that and be done with it, instead of doing something less now that would eventually prove insufficient and would have to be redone.

Ron Irish, the city’s traffic systems analyst, expects to assemble information from the intersection survey, which produced 326 responses and many written comments, and the open house (I counted only two written comments by the time I left after an hour) and present a summary to the city council in May or June. It will be up to the council to pick an alternative to pursue.

If the council picks one of the more elaborate alternatives, it might be built in 2018, depending on availability of funds, though it’s hard to predict how long it would take to acquire the necessary right of way. Simple stop signs would take hardly any time at all. (hh)


10 responses to “On Gibson Hill: The smartest fix”