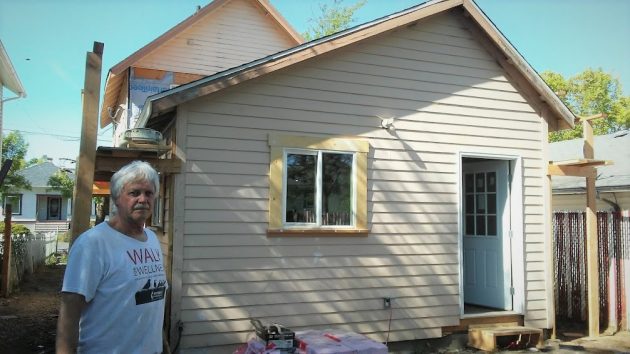 Paul Dykast in the backyard of the house he’s restoring. (Someone else put on the back addition with the uneven roof angle about 20 years ago.)

Time to check in with Paul Dykast, who’s been working since last November to renovate a small house at 830 Fourth Ave. S.E.  I dropped in on his project Wednesday afternoon. The timing was right because he’s nearing a deadline of sorts.

Turns out that Sophia, the elder of his two daughters, is buying the little house and plans to move in on May 18. That gives her dad and his helper, Chris Baker, little more than two weeks to get the inside livable. After that they’ll finish up on the outside. This week Baker was completing the new roof.

Dykast farms in the Crabtree area. To keep busy during winters, he buys dilapidated houses and fixes them up for resale. From the two examples I’ve seen, at First and Geary, he does a remarkable job, turning old houses into comfortable dwellings with modern conveniences but retaining some of their historic elements. You can read about it here.

The main part of the house at 830 Fourth S.E. was built around 1900. When Dykast bought it last year, it had been damaged by a fire and was crammed full of garbage and debris. To see it now, with new interior surfaces, windows, kitchen appliances and lights, the transformation already is incredible even though lots of work remains to be done.

Back in the 1990s, appraisers for the county for several years kept track of a slow-moving addition that enlarged the place to 1,280 square feet. Finally, one of them wrote: “It’s as good as it will get.”

Well, they should see it now, and again in a few weeks. (hh) 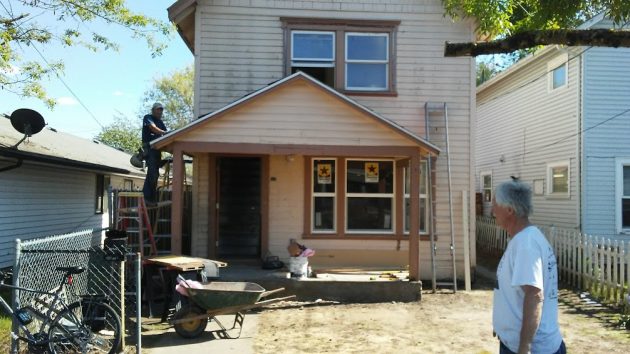 Working on the roof is Chris Baker, who’s helping Dykast with the restoration.


2 responses to “On Fourth, house rescue nears its finish”