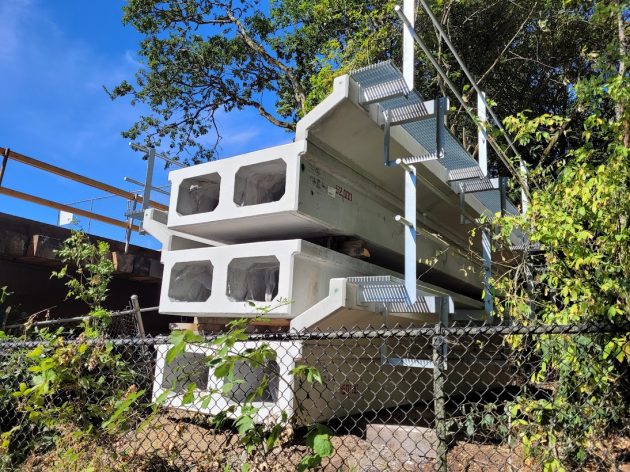 The contractor replacing the Union Pacific’s railroad bridge across Cox Creek is getting ready for the main event — tearing out the old wooden structure and installing the track on a new concrete deck.

This will take place Sunday, Aug. 14, starting at 7:30 in the morning, according to Bob Melbo with ODOT Rail.

The Cox Creek bridge is on the UP’s main line in western Oregon, a track used by 10 to 14 trains a day depending on the day. The track has remained open while new steel pilings were installed under the bridge over the last few weeks, but it will be shut down Sunday for the replacement of the bridge deck itself.

During the closure, passengers on affected Amtrak trains will be put on buses between Eugene and Portland.

UP’s contractor on the job is Hamilton Construction of Springfield. Bob Hirte, director of Hamilton’s rail division, believes the bridge being replaced dates from around 1938.

In an email, ODOT’s Melbo explained the old and new structures:

“This bridge, located on a 2-degree curve, is more or less a traditional wooden trestle with bents (clusters of wood piling) 15 feet apart.  The stringers resting on top of the bents support a wooden deck with side boards, forming a trough in which crushed rock ballast hosts the track structure.  This is different than an open-deck trestle where the ties are placed directly on the stringers and if you were walking across you can see the ground below between the ties. The new bridge will be made of prestressed concrete tubs supported by steel pilings.  The concrete tubs are designed to hold ballast so the track over the bridge will continue to be nested in crushed rock.”

Melbo was the Oregon superintendent of the Southern Pacific Railroad and then became head of the Willamette & Pacific when SP spun off that shortline in the early 1990s. An expert on Oregon railroad history, he sent me newspaper clippings reporting on a train wreck at the Cox Creek trestle on Sunday, June 24, 1883.

At mid-day, a work train of the Oregon & California Railroad was coming south when the engineer saw the bridge was on fire. He tried to stop the train but couldn’t, and the bridge collapsed under the engine’s weight.

The engineer and fireman jumped off just before the crash, and 38 Chinese workers on the cars behind them jumped off too. No one was killed, and only two of the workers had minor injuries.

The wreck happened around noon that Sunday, and by Monday afternoon the track was back in service.

“What’s amazing to me,” Melbo said, “is how quickly 19th century railroaders were able to recover from incidents such as this.” (hh)


6 responses to “On Cox Creek, bridge replacement coming up”