On Clark Path, the wait is nearly over 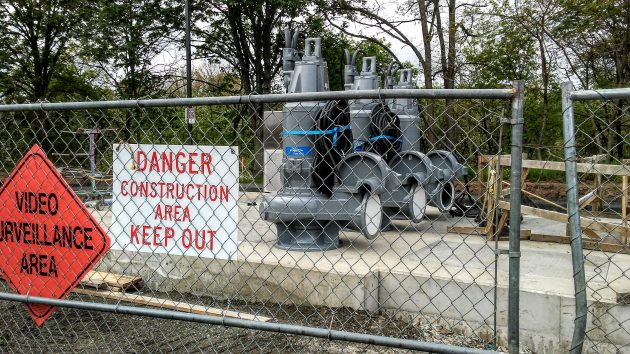 Three Swedish-made pumps sit on top of the lift station on Tuesday, waiting to be installed below.

Pretty soon people may be able to walk or bike along the full length of Albany’s Dave Clark Riverfront Path again. Construction of a sewer lift station on the path near Montgomery Street is nearly finished.

Three pumps have been moved to the site from the city’s operations yard, where they had been stored since being shipped from their Swedish manufacturer. They were to be installed in early May, and it looks as though that work could be done any time.

The Clark Path has been closed since July 2019 so the contractor, Pacific Excavation, could get started on the $7.2 million project to build the pump station, an electrical-equipment building to run it, and a 7,100-foot-long, 30-inch-diameter sewer main to the treatment plant. The installation is intended to take the load off the main Riverfront Interceptor to prevent overflows to the river during rainstorms.

The riverfront path, named for the longtime parks director who died in 2002, is being rebuilt, snaking through the pump station site. No word on exactly when that will be completed, but it should be soon.

Then comes the next step in this project to eliminate leaks and overflows from the Riverfront Interceptor, built in the 1950s. The city council tonight will be asked to award a $1.6 million contract to install 6,600 feet of “cured-in-place” pipe inside the old pipeline, which at its widest is more than 50 inches in diameter. The low bidder, of three, is Insituform Technologies of Chesterfield, Mo.

This type of sewer repair means the pipe, which is buried is as much as 30 feet deep, won’t have to be dug up. So presumably it won’t block the path again, or for as long. (hh) 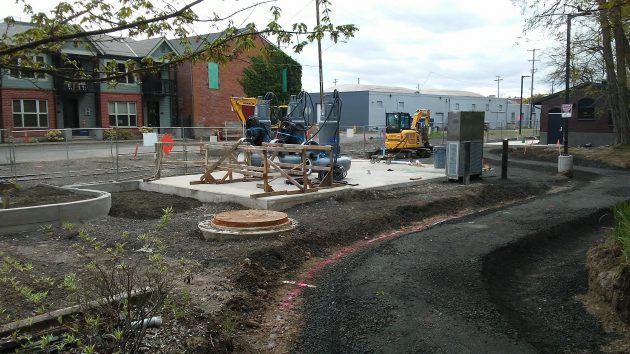 Base layer of rock shows where the new path will snake through the pump station site.

As for the new project blocking the path, City Engineer Staci Belcastro provided this additional explanation: “Using the cured-in-place pipe (CIPP) trenchless construction method to replace the sewer segments avoids the need for excavation, and will be less disruptive. There will be above ground equipment used to install the CIPP and for bypass pumping, but we will work with the contractor to have them stage equipment to minimize impacts to the path.”


2 responses to “On Clark Path, the wait is nearly over”