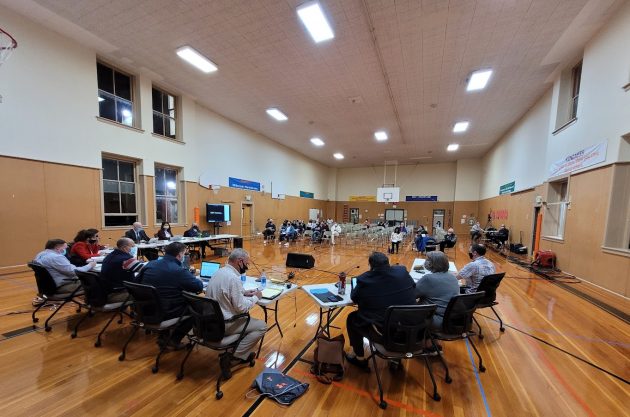 The Albany school board and administrators met Monday night in the gym of Central School.

Before they decide what to do about the Central and Takena buildings, Albany school officials need a lot more information, in the opinion of interim Superintendent Rob Saxton.

The school board on Monday voted 3-1 to accept the superintendent’s recommendation, which was to set aside $4.1 million in federal Covid-relief funds for adding classrooms to Takena School, and to spend the next several months gathering the information they need to decide whether to go ahead with that project and, if so, whether to add six classrooms or eight.

First, Saxton said, the board needs to commission a professional survey the community at large and, separately, people in the attendance area of Central and Takena schools about the idea of moving the third, fourth and fifth grades from Central to Takena and using the historic Central building for something else. Central was built in 1915 and partially remodeled in recent years.

Then, the board needs to hire a demographic study done to predict trends affecting the schools. In addition it should get a housing study to learn what types of dwellings — single-family, duplexes or apartments — are likely to be built in rapidly growing Albany over the coming years.

The board will need that information, Saxton believes, to decide whether six new classrooms at Talena are enough or whether eight should be built. There’s not enough money in the federal grant for eight, so if that’s the need, then other revenue will have to be tapped or found.

In addition, the super said, whatever is done with Central — assuming the students and teachers are moved to Takena to join the K-through-second grade contingent there — the district will have to spend money to make the building usable for its new role. So the decision about adding to Takena also should include specifying the conversion of Central and estimating the cost.

Board members Eric Aguinaga, the chairman, and Roger Nyquist and Pete Morse voted to accept the recommendation. Michael Thomson was against it. In his opinion, Central is no longer fit as a school building and the majority’s decision just postpones the inevitable.

Greater Albany Public Schools (GAPS) has until October 20 to decide on its use of the so-called ESSER funds for Covid relief, but Saxton told the board the spending plan can be changed until October 2024.

The upshot is that when I reported over the weekend that Central’s future would be decided by Monday, that prediction turned out to be wrong. (hh) 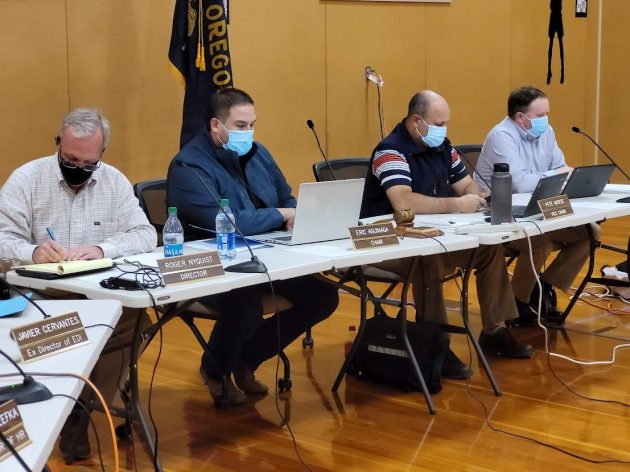 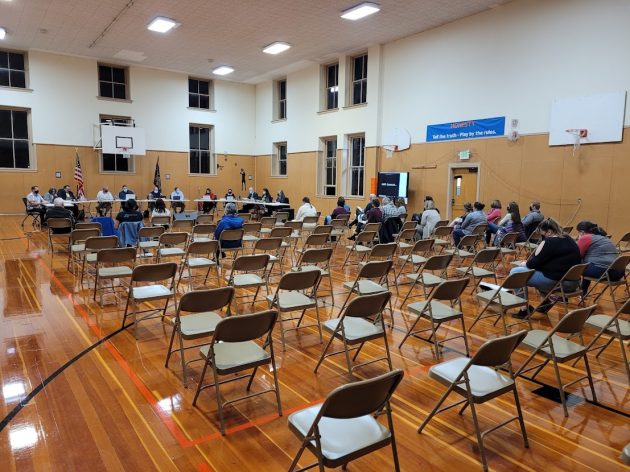 Not exactly standing room only at Monday’s GAPS board meeting in Central School.


2 responses to “On Central School, GAPS will seek more info”