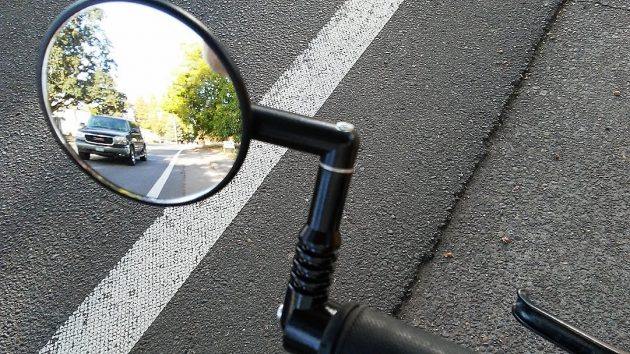 A mirror on your bike can keep you from turning in front of a vehicle coming up from behind.

On the bike the other day, I stuck out my left arm after not seeing anyone behind me and turned left. This earned me an angry honk from the driver whose vehicle I had not seen and who, I’m glad to say, missed me by a few yards.

The experience caused me to buy a mirror and install it on the bike I ride around town. It also reminded me of a brief exchange at a recent meeting of the Albany City Council.

Councilman Mike Sykes complained about reckless and dangerous behavior by people on bikes and wondered if anything could be done.

He had a point. It’s not unusual to see riders, usually male, more or less on the young side, wheeling their way through traffic without regard for life and limb, their own or anybody else’s. They run red lights. They ride on the wrong side of the street, against traffic. You wonder how they have survived as long as they have.

Can anything be done? If so, I don’t know what. The law is never around when you see one of these guys. Even if a cop managed to catch up with and stop him, what good would a ticket do for someone who lives with no concern for rules?

As for my situation on Salem Avenue the other day, I didn’t intend to cause the driver to have to hit the brake. (If he did; he may have been too busy hitting the horn instead.) I had not seen him coming up behind me, even though I looked.

So now, with the mirror installed, I’m hoping to be better equipped to prevent this from happening again. But may I also suggest: When I’m in the truck and coming up behind a cyclist in the bike lane on a busy road, I slow down and move over a little in case the guy does something I have no reason to expect. (hh)