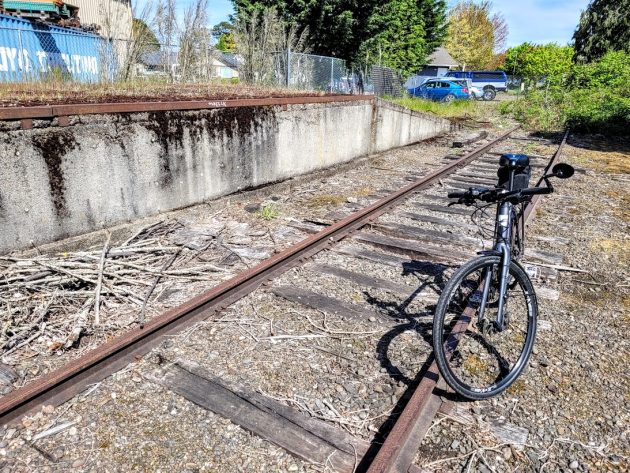 Looking east along an unused spur that now ends short of Hill Street, on May 4, 2022.

There’s a short length of rusty railroad track, just south of Crabtree Automotive, that reminds me of stories the Albany paper reported many years ago.

The track comes from the Southern Pacific property off Ninth Avenue and heads southeast toward Hill Street, where it ends. Aerial photos show this track was still in use in the 1990s. The photos, blurry though they are, show boxcars parked next to the loading dock that now is abandoned and covered with moss and weeds.

Maps also show that the track at one time used to run across Hill Street, to serve what I think was a seed mill or warehouse, or similar operation.

Back in 1981, Albany developer Bud Spencer had an idea that was 40 years before its time. For the 3-acre site of the former seed mill, just north of the Boys’ and Girls’ Club east of Hill Street, Spencer drew up plans for what now is called “middle housing.”

He got the planning commission to give preliminary approval to a planned unit development there of 29 dwellings in clusters of two or three each, “with adjoining walls and zero setbacks,” as a Democrat-Herald editorial described it in March 1981.

The plan also called for turning the unused railroad right-of-way, from Hill to Oak Street, into an extension of the Periwinkle Creek Bikepath, which Albany and the Highway Department had completed in 1977.

Nothing came of Bud’s housing development, and I can’t remember why. The bike path extension eventually was completed, though, and the site of the former seed mill north of the path now holds a big Boys’ and Girls’ Club gym.

West of Hill Street, the unused railroad track remains. The place gets a rare visit from me on one of my aimless bike wanderings to out-of-the-way places in the older parts of Albany.

As you can see in the photo below, the spur is still connected with the Southern Pacific property to the northwest — most recently used to store and ship logs — and then to the Albany rail yard on the west side of Jackson Street. (The “Southern Pacific Transportation Company” belongs to the Union Pacific.)

As far as I can tell, this section of track gets no use. It’s a spur to nowhere. (hh) 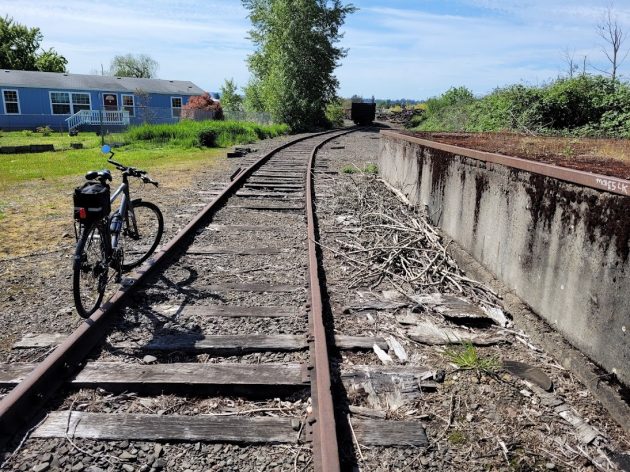 In this direction the track leads through the Albany yard and south to California.


13 responses to “Old railroad track spurs memories of years ago”