Old house demolition: Not yet 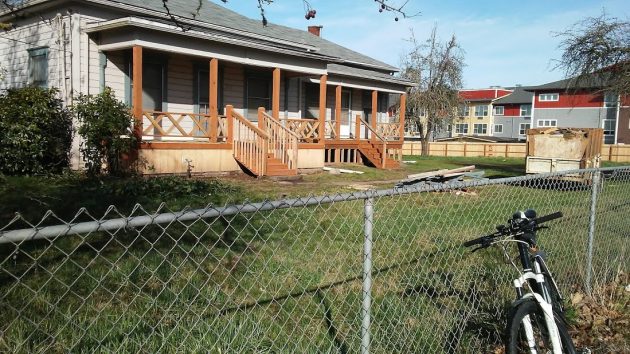 This house on Albany’s Salem Avenue, more than a century old, was destined to be gone by now, but its demolition has obviously been postponed. Instead of being razed, it’s getting its porches repaired.

This may not be the most sensational news you hear this week. But I was interested because (1) the house is on one of my bike routes and (2) I remembered covering a demolition hearing concerning it before the Albany Landmarks Advisory Commission almost seven years ago.

Called the Vunk House, the duplex has two addresses, 2751 and 2753 Salem Ave., and was built either in 1890 or 1912, depending on whether the city planning staff of the county tax department is correct. The house is on an inventory of historical Albany houses and, in 2011, was said to be one of the two oldest houses on the street.

In September 2011, the Landmarks Commission acted on a request for permission to demolish the house. The owner, Glorietta Bay LLC, Scott Lepman’s family trust, asked for the city’s OK to raze the place unless someone wanted to move it. The commission, though, required any demolition to be put off for at least a year, and Lepman was fine with that.

Now it’s been way more than a year. And on Sunday, when I saw fresh wood on the porches, I thought I’d better refresh myself on the Vunk House’s fate. I checked with Lepman, and he told me he still eventually hopes to replace the house and use its site and the vacant lot to the west to develop 51 apartments. (The lots together are about two and a half acres.) But he has several projects going in Albany and elsewhere, and he’s not definite on the timing of this one.

In the meantime, though, one of the porches of the duplex needed repairs for safety. Those repairs being made, the tenant of the other half asked that the porch on that side be fixed as well. And that’s what is being done.

So, this old house is still likely to disappear one of these days, or years. But not yet. (hh)


One response to “Old house demolition: Not yet”