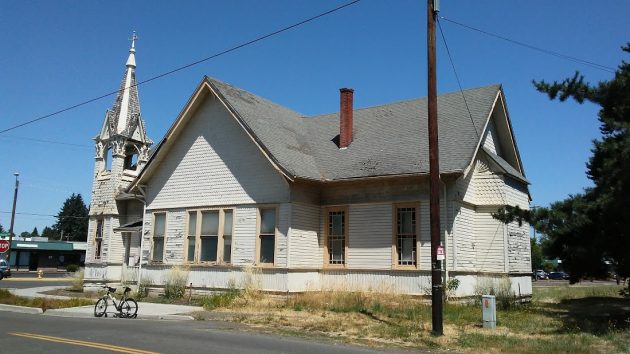 The Main Street side of the former church the way it looked in July 2017.

If anybody wants to move and preserve Albany’s former Cumberland Presbyterian Church, better speak up now and have a plan to come up with the money to do so. The city of Albany isn’t going to do it because four council members, a majority, are opposed.

Parts of the church including the steeple date from 1892. The center section was added later. The building has been in city ownership since the council bought it for $150,000 in 2000 for a street project, for which it ended up not being needed when the plans changed.

For years the council and various city officials have wrestled with what to do with the deteriorating building. On Monday afternoon, the council tackled the question once again.

The upshot: Parks Director Ed Hodney was directed to explore whether there’s a potential buyer. The goal would be to negotiate something “to take the church off our hands and free the property for sale,” in Hodney’s words. He’ll report back to the council in two weeks.

Council members Rich Kellum, Mike Sykes, Bill Coburn, and Bessie Johnson are opposed to an idea that emerged from a mayor’s work group last year. That was to have the city move the building to a city-owned parcel next to the Albany Skatepark near Hackleman Park. Then, the idea was to try to raise money to revive the old structure as a community center.

The four have various reasons, mostly that the city shouldn’t spend the money because it has many other pressing needs.

Council members Ray Kopczynski and Dick Olsen and Mayor Sharon Konopa would like to follow through with the move option, using urban renewal funds. They got nowhere on Monday.

If you’re interested in exactly what everybody said, listen to the audio recording when it becomes available at cityofalbany.net, probably later on Tuesday.

The council work session drew an audience of about two dozen people from the neighborhood of the old church, favoring the move and conversion of the building. There was mention of a petition in favor of this, with some 400 signatures.

One of the possibilities: The neighborhood group could become organized and raise the money for the move and conversion. That’s one of the avenues Hodney will likely explore. (hh)