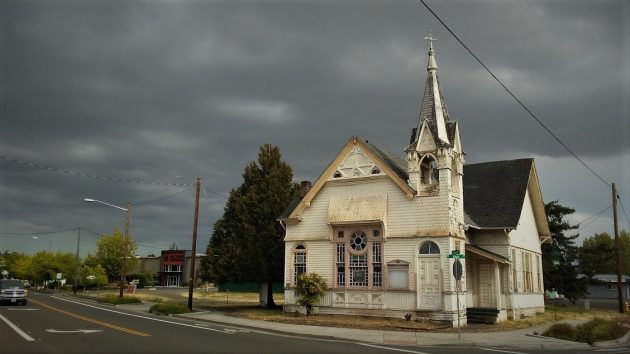 The former church and its neighbor, the Baldwin construction company, on Monday evening.

You may be tired of reading about the former Cumberland Presbyterian Church. Tough. You’ll have to put up with it for a while longer because the Albany City Council still has not made a decision on what to do with the decaying building at Santiam Road and Main.

Council members Ray Kopczynski and Dick Olsen, along with Mayor Sharon Konopa,  want the city to use urban renewal money in the CARA program to move the building to a city-owned parcel near Hackleman Park. There it would be restored as a “community center,” perhaps with money raised in a public campaign.

Councilors Bill Coburn, Bessie Johnson, Rich Kellum and Mike Sykes want no city money spent on the project, ruling out the use of CARA funds.

Two weeks ago the council asked Parks Director Ed Hodney to explore selling the property with a couple of parties. On Monday he reported that Yohn Baldwin, owner of the Baldwin construction company next door on Santiam Road, was interested in the property but not the building, but had offered unspecified help in any effort to save and preserve the building.

The council voted to instruct Hodney to talk to Baldwin some more and offer to sell him the property. Hodney suggested some deal with a delayed closing date if several conditions are met, including that a funding campaign for moving the building be successful.

A group in the Willamette Neighborhood, which had called for moving the building and preserving it for its historic nature, did not have the “wherewithall” to carry out that idea, Hodney said.

In a letter, Baldwin told Hodney it would cost about $550,000 to reroof the building and restore it to a “gray shell condition.”

Monday’s council work session erupted in a testy exchange between Olsen and Kellum over the nature of CARA funds. You can listen to it when the audio is posted on the council’s website, probably by Tuesday. The gist was Olsen’s opinion that CARA money was not the same as other taxes since it doesn’t raise the taxes people pay, even though it looks that way on property tax bills.

The church, which the city bought in 2000 for $150,000 for street purposes but then didn’t need, seems to be more dilapidated every time you look at it.

15 responses to “Old church: Its fate still not settled”