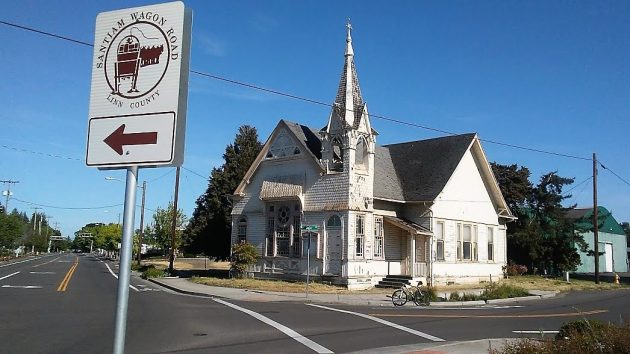 The former Cumberland Presbyterian Church, at Main and Santiam, the way it looked on May 27.

Once again the Albany City Council will be asked to decide what if anything to do with the former Cumberland Presbyterian Church at Main Street and Santiam Road.

Last year a work group assembled by Mayor Sharon Konopa came up with a proposal to have the building moved to a city-owned parcel near the skate park at Eleanor Park and restore it as a community center. But the idea stalled because a council majority was reluctant to spend tax money on the move.

Now, Ed Hodney, director of parks and recreation, says he has been asked to present options for the building at a council work session on June 11. What options? He replied he was still working on that.

The city spent $150,000 to buy the building 18 years ago, in 2000, intending to move or demolish it to make room for a street project. But when the Main Street project was done in 2014, the property wasn’t needed after all. In February 2015, the council agreed to give the building to a charity for $111. The charity wanted to raise money to turn it into a counseling center but didn’t follow through, and the city retained ownership.

At the time the council did not consider an offer from someone who wanted to turn it into a wedding chapel.

The building dates from 1892 and has been vacant since the city bought it. In recent years it has been rented, as storage, to the Universal Coffee shop across the street.

What options for the building are there? I’m thinking there are at least three: Follow through on moving it, which would require tax money from CARA, the downtown urban renewal district; offer it for sale again and hope somebody wants it; or raze it and offer the site for sale as bare land. (hh)